Most non-native English speakers make grammatical mistakes while speaking in English. Improving grammar takes time and effort but it is well worth it.

Here are some tips which will help you improve English grammar.

# 1. Understand the building blocks of grammar

As a first step, it is important to know the different building blocks of grammar like nouns, pronouns, articles, adjectives, verbs, adverbs, prepositions, conjunctions and interjections. The internet is full of resources about these and it is usually a good idea to understand them well.

When you read an article or watch a movie, it is important to pay attention to how sentences are constructed. This practice helps ingrain different sentence structures and will help your spoken and written English.

#3. Practice when you can

This tip can never be overemphasized. As an English learner, it is extremely important for you to talk in English at any given opportunity. If you do not have partners to practise with, then try to speak in front of the mirror.

#4. Grammar exercises will help you

Many learners have improved their grammar working with a mentor. A mentor could even be a friend who has a strong command over English grammar. You must speak only in English with your mentor and ask the mentor to point out your mistakes. This real time feedback is very beneficial in improving grammar.

Many students find that an English improvement course is the quickest way to improve English grammar. If joining a classroom program is difficult, then an online course is a great option.

A noun is a word used as the name of a person, place or thing.
Examples: King, Mohan, Sarita, Mumbai, Table

A pronoun is a word used instead of a noun.
Examples: He, She, It, They

The words ‘a’, ‘an’ and ‘the’ are called articles. They are used before nouns.

A verb is a word that describes an action or occurrence or indicates a state of being.
Examples: He talks to Sameer, She sings a song

An adjective is a word used to describe a noun.
Examples: Beautiful house, Tall man

An adverb is a word which modifies the meaning of a verb, adjective or another adverb.
Examples: He runs fast, They fought bravely.

A preposition is a word which shows the relation between the noun or pronoun and other words in the sentence.
Examples: The boy is in the room, The book is on the table.

Prepositions are also categorized based on their use in a sentence as:

A conjunction is a word which joins to sentences to complete their meaning.
Examples: They reached the station but it was too late.
He put on his shoes because he was going for a run.

An interjection is a word which expresses sudden feeling or emotion.
Examples: Hello!, Alas!, Hurray!, Oh!

In the English language, there are two ways of conveying what someone else has said: direct/quoted speech and indirect/ reported speech.

Learn 12 tenses in English with grammar rules and examples.

Learn useful punctuation rules, definition and usage of each punctuation marks that are commonly used in English.

How to Improve your Grammar in English | Infographic 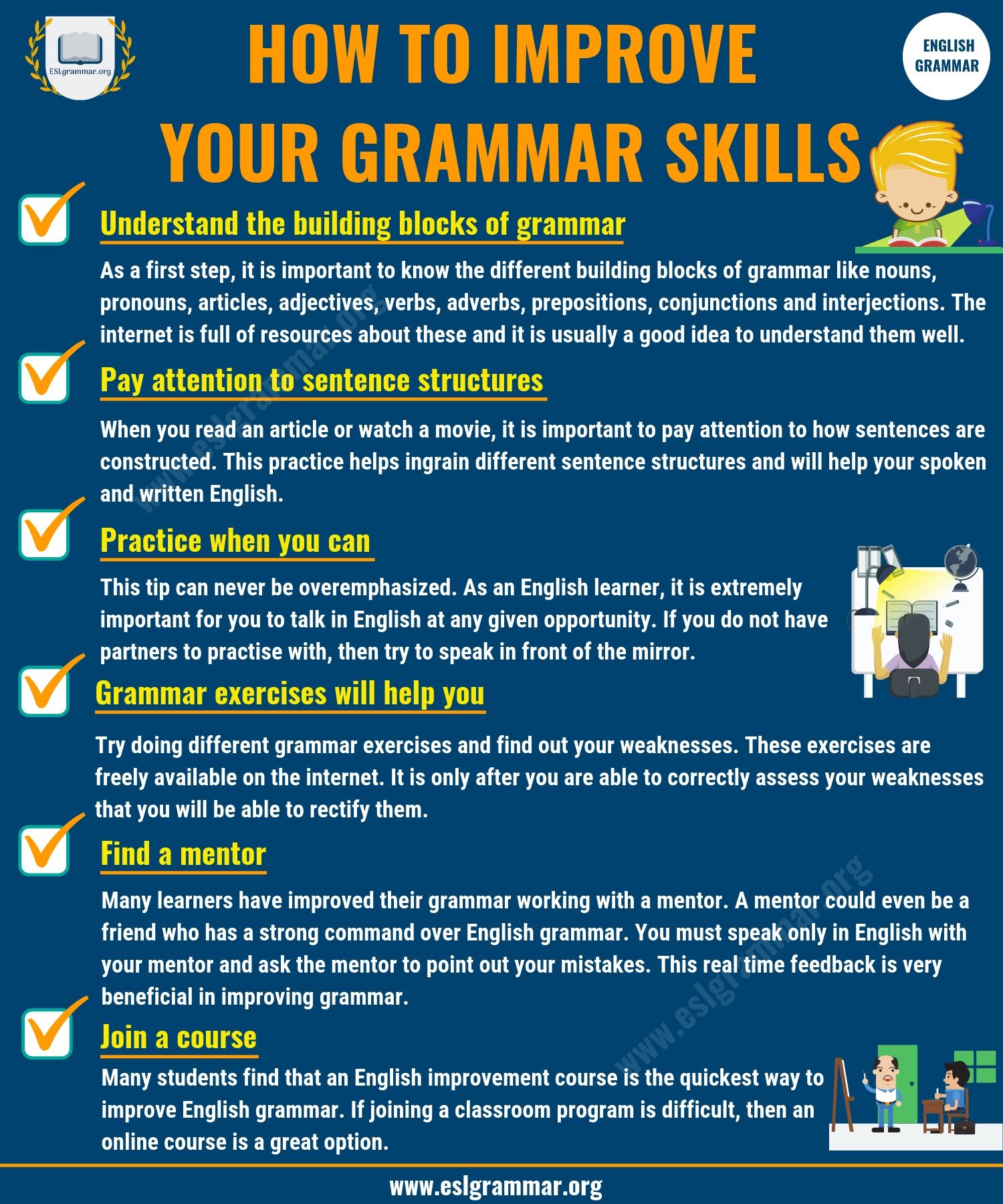