Adverbs in English! What is an adverb? Learn different types of adverbs and how to use them in English sentences with useful examples, practical exercises and free ESL printable infographic.

What is an Adverb?

Adverbs are words that are used in sentences to describe or change the meaning of a Verb or Adjective or even another Adverb. They add a description to the sentence to make it more detailed and interesting. For example:

Here, one can see that the Adverb ‘slowly’ is describing the Verb ‘walk’ by telling that the person was walking slowly.

Adverbs are used in sentences to answer many questions about the Verbs/Adjectives/Adverbs themselves. The different types of Adverbs are as following:

What is an adverb of time? Look at examples below:

E.g.: The results were announced yesterday.

Here the Adverb is yesterday which is answering the question: When were the results announced? ‘Announced’ is the verb in this sentence.

E.g.: She will visit the hospital tomorrow.

Here the Verb is ‘visit’ and the Adverb is tomorrow as the question being asked is: When will she visit the hospital?

Other examples of Adverbs of Time are – Once, Never, Tomorrow, Daily, etc.

What is an adverb of place? Look at examples below:

E.g.: They will meet you there.

The Adverb here is there that is specifying a place for the Verb meet and the question being answered is: Where will they meet you?

Here the Verb is bloom and the Adverb is everywhere, answering the question: Where do the flowers bloom in spring?

Other examples of Adverbs of Place are – Anywhere, Somewhere, Near, Far, etc.

What is an adverb of manner? Look at examples below:

E.g.: He quietly slipped away.

The Verb here is work and the Adverb is fast and the question being asked is: How does she work?

These Adverbs tell about the manner of the action being done, whether it is done happily or haltingly etc. Other examples of Adverbs of Manner are – Honestly, Joyfully, Cunningly, etc. 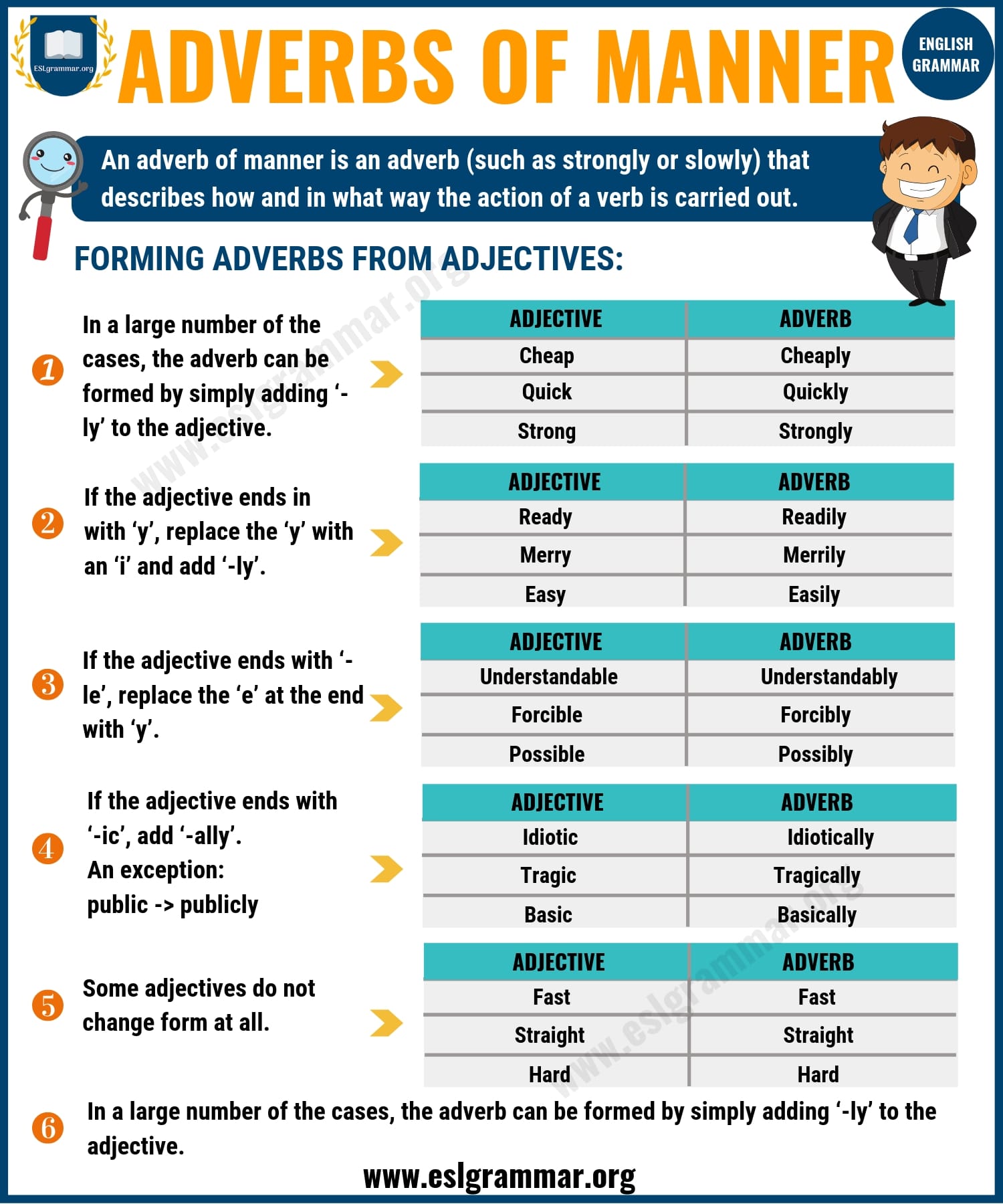 What are adverbs of frequency? Let take a look at those examples below:

E.g.: He likes to watch TV every day.

Here, the Adverb is every day and it is telling about the amount of time spent in doing the Verb, which is watch. The question in this sentence is: How often does he watch TV?

E.g.: They meet every week.

The Adverb here is every week and it is telling the frequency and the Verb is meet. The sentence is telling us: How often do they meet?

These Adverbs are used to show the duration or timing of the action that is happening/had happened/will happen. They also tell us how often and how long these actions would be.

Other examples of Adverbs of Frequency are – Frequently, Often, Yearly, Briefly, etc. 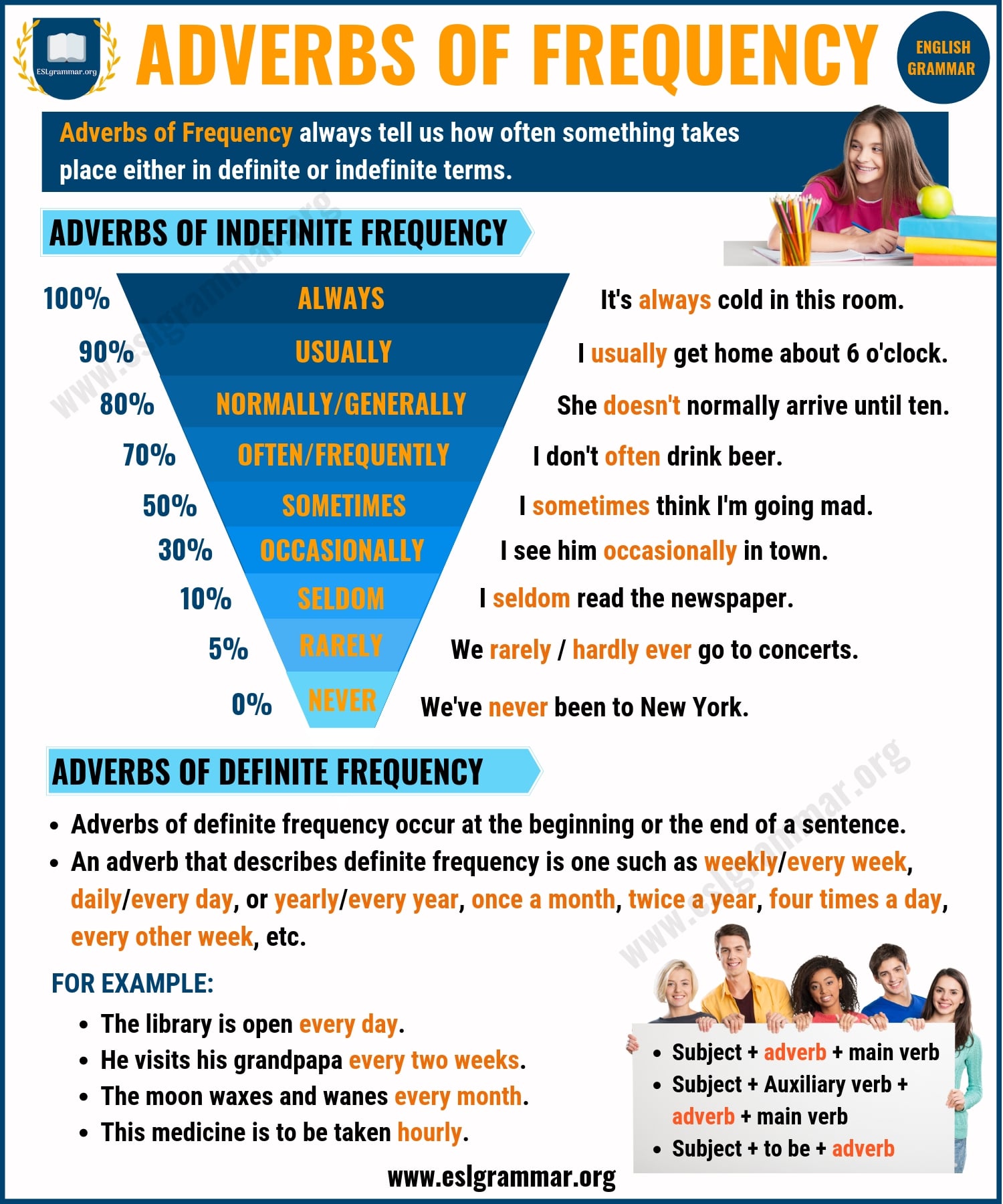 E.g.: She almost finished the work.

The Verb here is finished and the Adverb is almost which is telling us about the amount of the work finished. The question being asked is: How much of the work did she finish?

E.g.: They were completely surprised by the windfall.

The adverb here is completely which is showing the degree to which ‘they’ were surprised which is the Verb. The question being asked here is: How much were they surprised?

The Adverbs of Degree are used to show to what extent or how much has an action been done or will be done.

Other examples of these Adverbs are – Fully, Partially, Altogether, etc.

Adverbs of Confirmation and Negation

The Adverb here is certainly which is reinforcing the Verb like in answer to the question: Will they like this vase?

E.g.: He never leaves his house.

The Adverb never is negating the Verb leave. It is answering the question in denial: Does he ever leave his house?

These Adverbs either confirm or deny the action of the Verb. They are also used to reinforce the action that is described by the Verb.

Other examples of Adverbs of Confirmation are – Definitely, Absolutely, Surely, etc. Examples for Adverbs of Denial or Negation are – No, Don’t, Can’t, etc.

They found his secret easily.

Unfortunately, they found his secret easily.

Here, we see that adding the Adverb, unfortunately, has changed the entire tone of the sentence. Earlier, it was a passive tone, now it has a negative or disappointed tone.

What are adverbs of conjunction?

Clause 1: He was going for an important interview.

Clause 2: He made sure he reached on time.

He was going for an important interview; accordingly, he made sure he reached on time.

Here, we see how the Adverb ‘accordingly’ is joining the two clauses and showing the relation between them with the use of a semicolon (;). Accordingly means- therefore or that is why.

A few other Adverbs of Conjunction are:

What is the correct place to put an adverb in English sentences?

Adverbs can be used in diverse ways, which means that they are very flexible in sentences; they can be moved around quite a bit without causing any grammatical irregularities.

Adverbs are used to begin sentences/clauses

Adverbs are used in the middle of sentences

Adverbs  are used to at the end of sentences 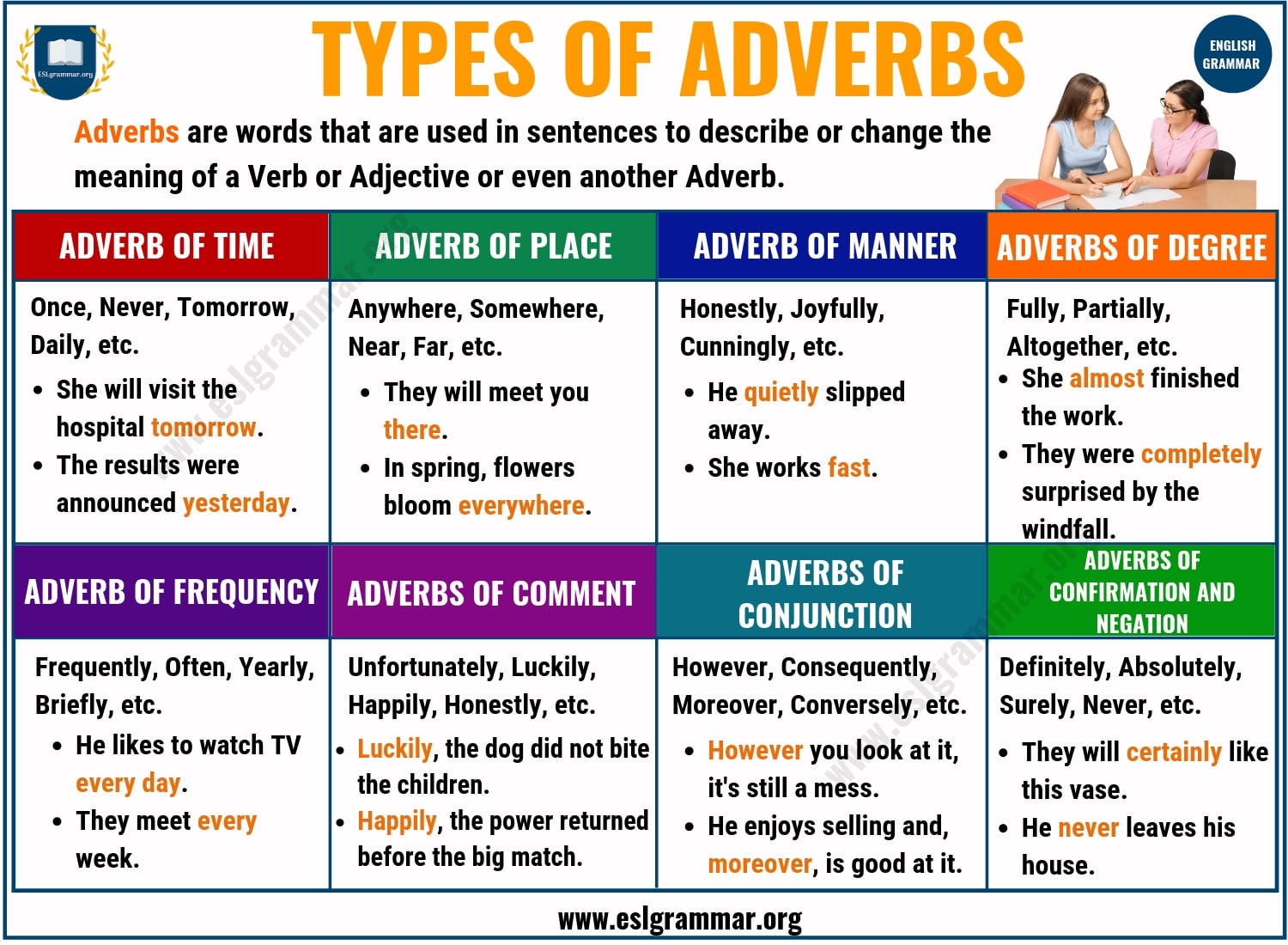 I’m agree with you that English pronouns

ur mom
Reply to  Abdul Hafeez

Your English is quite bad, but keep trying!!😁

I always like your graphics and often use them in class. However, your ‘Placement of Adverbs’ graphic is wrong about Adverbs of Comment. #1, ‘intelligently’ is an adverb of manner not comment. Adverbs of comment are ‘Fortunately’, ‘Unfortunately’, ‘Honestly’ etc, (as you put in the other picture). #2 Adverbs of comment belong at the beginning of a sentence not the end.

This is a great way to teach adverbs to ESL

Unfortunately, those who criticize some of the content of this page make mistakes in their English writings themselves. As far as I can think, the content of this site is really genuine and useful for both English teachers and students. They can make good use of it when coming to the delicate details in using English grammar in general. I can only thank the people running this site for the big efforts made to accomplish this great job.

Good Morning! I wish to know the basic difference between all the subordinate clauses.

Very useful… Thank you so much for the big help. 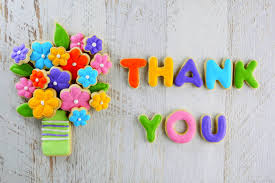 Words like TOMORROW and TODAY are not adverbs. Both are nouns that are functioning as adverbials. But not all adverbials are adverbs. Do not confuse form with function.

How many kinds of adverbs are there what r they? Give examples