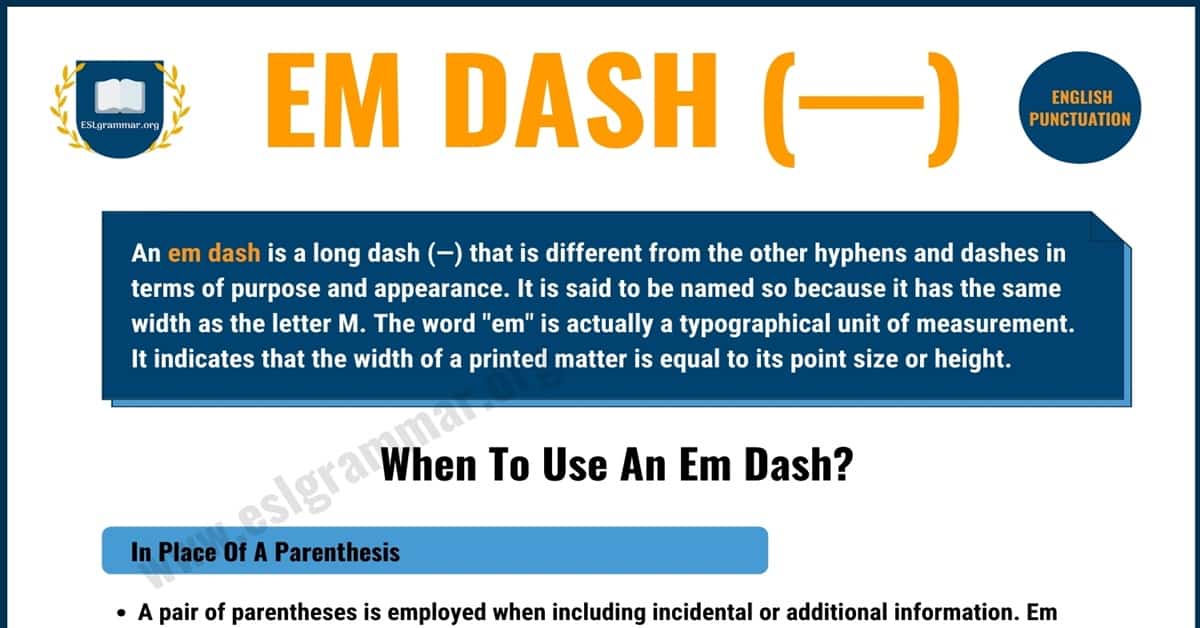 What is An Em Dash? Punctuation marks play a significant role in relaying information and conveying expressions. They indicate pauses, emphasis, separation, and even the tone in a specific text. These punctuations include periods, commas, question marks, and exclamation points, to name the most common ones. But are you aware of some punctuation marks that are not typically employed in writing but provide a wide array of uses? One of them is the so-called em dash.

What is An Em Dash?

First of all, an em dash is a long dash (—) that is different from the other hyphens and dashes in terms of purpose and appearance. It is said to be named so because it has the same width as the letter M. The word “em” is actually a typographical unit of measurement. It indicates that the width of a printed matter is equal to its point size or height.

Em dash is an impressively versatile punctuation mark that can take the place of commas, parentheses, or colons, depending on the context. However, despite its flexibility, it can only be used at most twice in a sentence for best use. Otherwise, it will create confusion and complexity. Em dash is longer than the en dash, which is also slightly longer than the hyphen. These three serve different purposes, to which that of the em dash is focused on in this article.

When To Use An Em Dash?

In Place Of A Parenthesis

A pair of parentheses is employed when including incidental or additional information. Em dashes can replace a pair of parentheses. The choice as to which is more fitting depends on the formality and emphasis of the parenthetical text. Em dashes are less formal than parentheses. Use a pair of em dashes if you want the reader to be drawn to the additional idea. It gives more emphasis to the included information. When the inclusion is stated at the end of the sentence, only a single dash is used. Nevertheless, if you want to display the idea more subtly, then just use parentheses.

Example: The teacher—the substitute one—is surprisingly strict for her first day in class.

In Place Of A Colon

An em dash can take the place of a colon when it is used to emphasize a conclusion or a significant afterthought. Again, the dash is less formal. So, it is better employed in casual texts.

In Place Of A Comma

Note that the substitution of em dashes to a pair of commas should only be done when stating an interruptive phrase. Em dashes are not suitable to be used in between enumerated items, which is another purpose of commas. Since em dashes create more emphasis, it gives more force to the interruptive phase. Therefore, you should still consider the subtleness of the phrase before using em dash.

Example: That choice—like any other choice you made—entails sacrifices, which hopefully will not stop you from attaining your goal.

Set Off Appositives With Commas

Though em dashes are not appropriate when used in between enumerated terms, it can be used before and after the enumeration. Enumerations are sometimes in the form of appositives. An appositive is a noun or a noun phrase that renames the other noun beside it. Commas are commonly used to set off appositives. But if the ideas are already separated by commas, adding the same punctuations might confuse the reader. So, in this case, you may instead place a pair of em dashes.

Example: The three of them—Blossom, Bubbles, and Buttercup—defeated Mojo Jojo.

An em dash, or a pair of them, can indicate a sudden break in thought or interruption in a statement. This style is widely used in free and creative writing, primarily in quotations or dialogues in a story or novel. It portrays that the writer or speaker had a sharp shift in thoughts or opinion.

Example: How do I answer this—never mind, I get it now.

Aside from contextual purposes, the em dash can also represent the unknown. A series of multiple em dashes can be employed to indicate missing words. These missing portions can either be undetermined or intentionally excluded. If only a part of the term is missing, two consecutive em dashes are used. If the entire word is unknown, two or three em dashes are used, with the appropriate surrounding punctuations still employed. 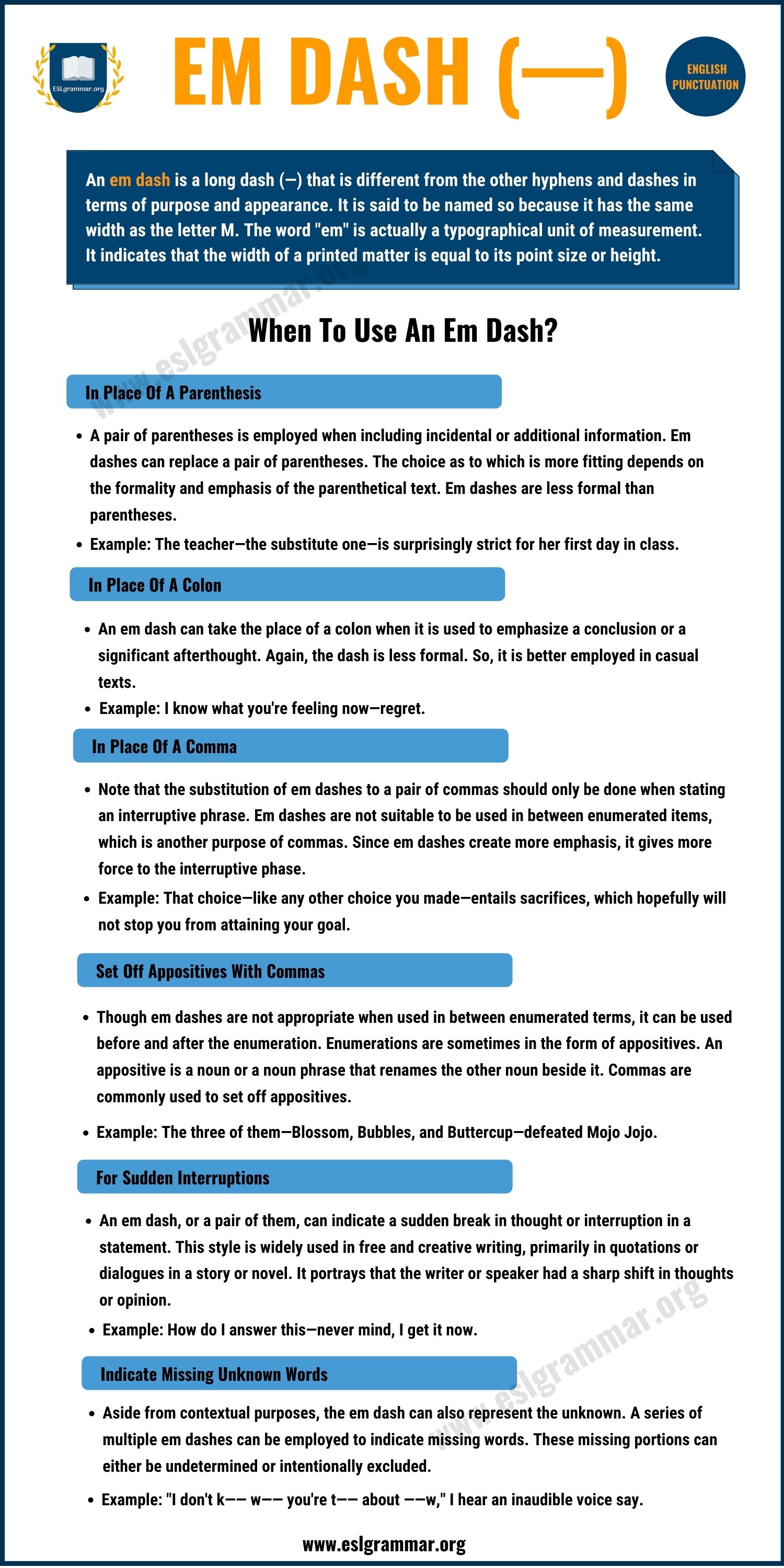