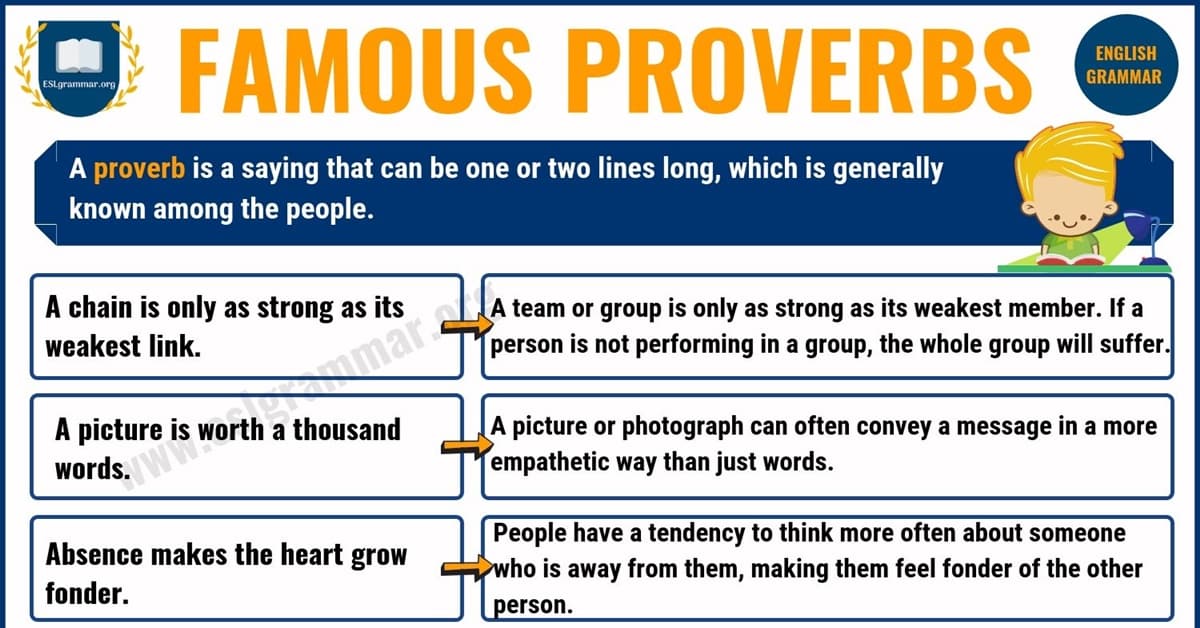 Famous Proverbs in English! Learn proverb definition, list of 25 famous proverbs with their meaning and ESL printable worksheets to improve and increase your English vocabulary words.

What is a proverb?

A proverb is a saying that can be one or two lines long, which is generally known among the people. A proverb expresses truth, wisdom or a lesson on morality based upon common sense and practical experience. Every culture in the world has their own heritage of proverbs that are often spread to other cultures as well, an example of this is the Bible which has spread many proverbs among its followers around the world.

Here we have listed out some of the most common proverbs and their meaning:

A team or group is only as strong as its weakest member. If a person is not performing in a group, the whole group will suffer.

A picture or photograph can often convey a message in a more empathetic way than just words.

People have a tendency to think more often about someone who is away from them, making them feel fonder of the other person.

Actually doing an action has more impact than simply speaking about it again and again.

No one can stay happy forever, eventually, some hurdle or event will temporarily or permanently end a good streak.

Everyone has a different perception of beauty and thus their definition of what can be considered beautiful also differs.

It is better to arrive somewhere later than planned rather than to not arrive at all.

People with similar tastes often form a group for company or discussion.

This phrase is used when you spend or lose something that had come to you without much effort on your part.

People who have the courage to follow their plans, even when faced with obstacles, are often successful. A saying used to encourage someone.

One should wait patiently for the things they want and not rush after them.

It is better to tell the truth in a situation rather than a lie.

If something is going well or working properly, it should be left as it is and should not be interfered with.

It is better to do the work yourself than rely on someone else and not be sure of the results.

Know your enemies even better than you know your friends to vanquish them. It’s also used to mean make an appearance of friendship with an enemy to blindside them later.

It means to say that a person should not criticize others when they themselves have similar faults or are not completely faultless.

The best way to hone a skill or make one better at something is to practice it relentlessly.

Starting the day early and getting to your work earlier is more beneficial to a person.

Exchange of ideas and information is a better way to settle disputes or convince someone than using force and violence.

Sometimes two people can come up with a solution to a problem that could not be solved by one person. Better to have help on a problem that you cannot solve by yourself.

Doing something bad to a person who has wronged you will not negate the wrong that person did. You cannot do something wrong just because someone else did and was not punished.

It is better to follow the customs and behavior of the people around you, when you are in an unknown area or society.

When difficulties arise, strong determined people just work harder rather than giving up.

Do not judge things by the way they appear, their actual nature or function might be completely different.

10 POPULAR PROVERBS FROM OTHER CULTURES:

These are some of the common proverbs that exist in the two main English speaking countries of the United Kingdom and the United States of America. However many proverbs from other cultures have been translated to English and have gained popularity among the people, here are 10 of them that we like best:

1. “A dimple on the chin, the devil within” – Gaelic proverb

A superstitious proverb based on physical appearance, where having a chin indent signifies that a person is wicked or deceitful.

It means to be evasive or non-committal about something, it comes from a Japanese wedding and tea rituals.

When a man is inebriated, they are more likely to tell the stories or occurrences that they normally wouldn’t if they were sober.

4. “He who buys what he does not need, steals from himself.” – Swedish proverb

A person should spend only on essential or necessary items and avoid frivolous expenses.

5.“An axe forgets what the tree remembers.” – African proverb

It is easy for someone who is hurting another person to forget the wrong and move on but the person who was hurt never forgets.

6. “The eyes believe themselves, the ears believe other people.” – German proverb

Do not believe everything that everyone says to you, trust your own judgement or wait to see something with your own eyes before believing someone.

7. “A clear conscience is a soft pillow.” – French proverb

If a person is guilty of some wrongdoing, their guilty conscience will let them have no rest, while an innocent person will be peaceful and calm.

8. “To call a man a thief gives him the right to be one.” – Old Arabic proverb

Treating someone in an unfair or cruel way will ensure a similar behaviour from them in the future.

9. “Opportunity knocks only once.” – Spanish proverb

Always seize an opportunity when it comes your way as you may not get another chance at it.

10.“Your elbow is close but you can’t bite it.” – Russian proverb

A way to express when someone is physically present but emotionally distant or when something can be seen but is just beyond your reach. 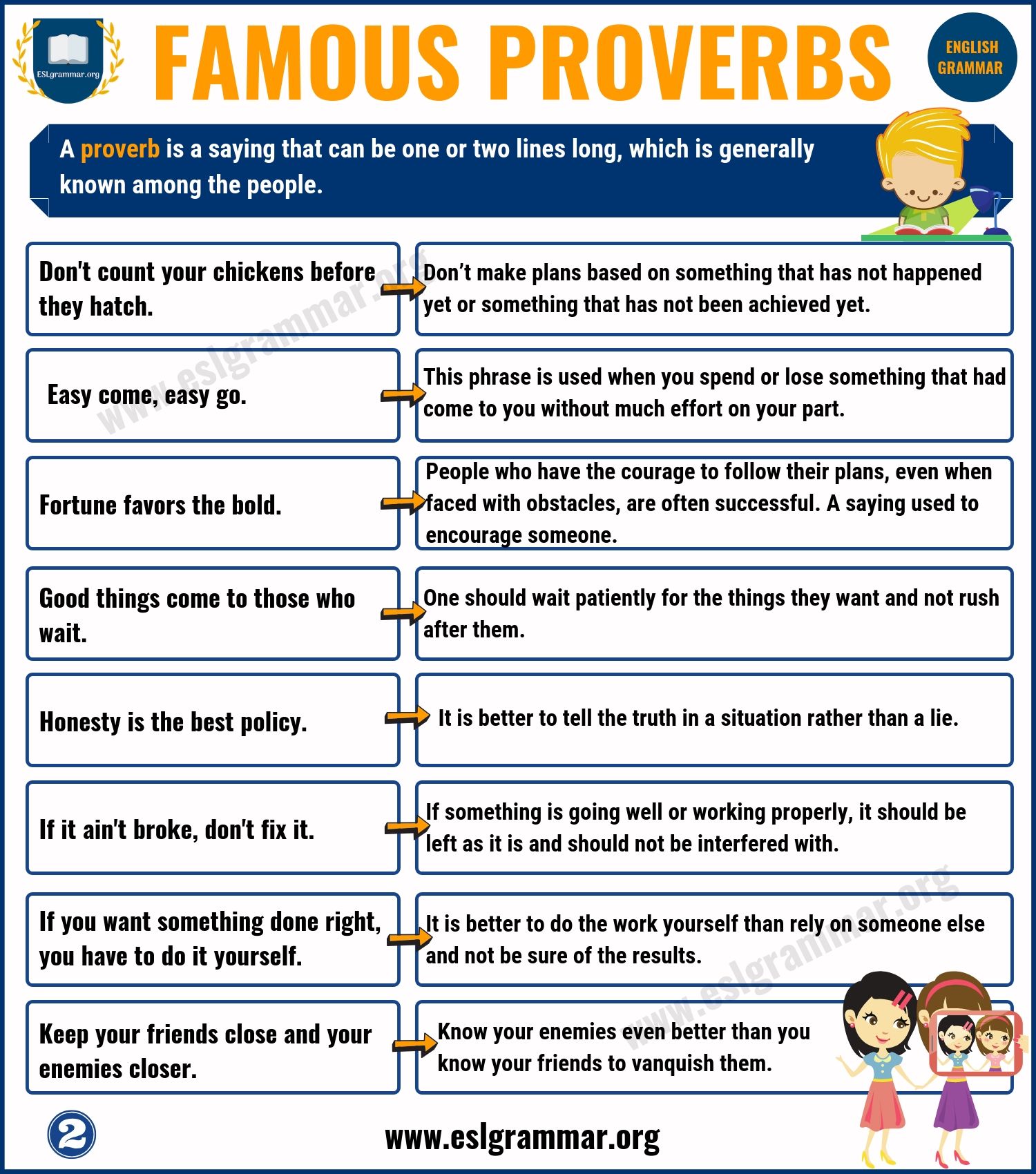 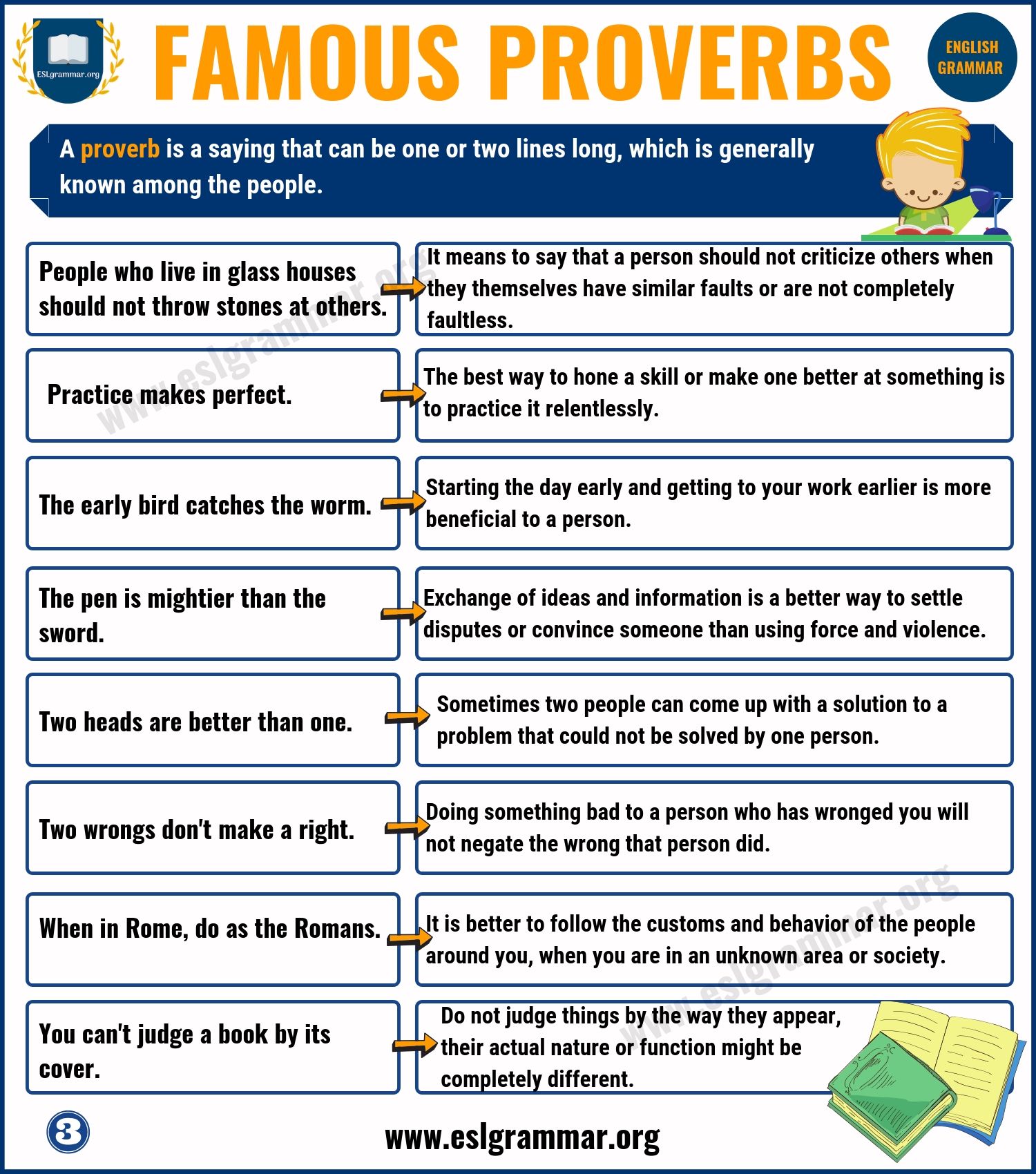 Blood is thicker than water:
Family relationship is most significant in your life.

“If it ain’t broke, don’t fix it” that’s what I love to say to myself when a Windows OS update comes and so I delay the update.

what do you mean

Hello
This is nice

If I ain’t an problem then don’t fix.

life is precious than money﻿

TASTE DIFFERS
WHO CAN TELL ME THE ANSWER

ONE MAN’S FOOD IS ANOTHER MAN’S POSION

do karma dont wait for your destiny

birds of the same feathers really flock together