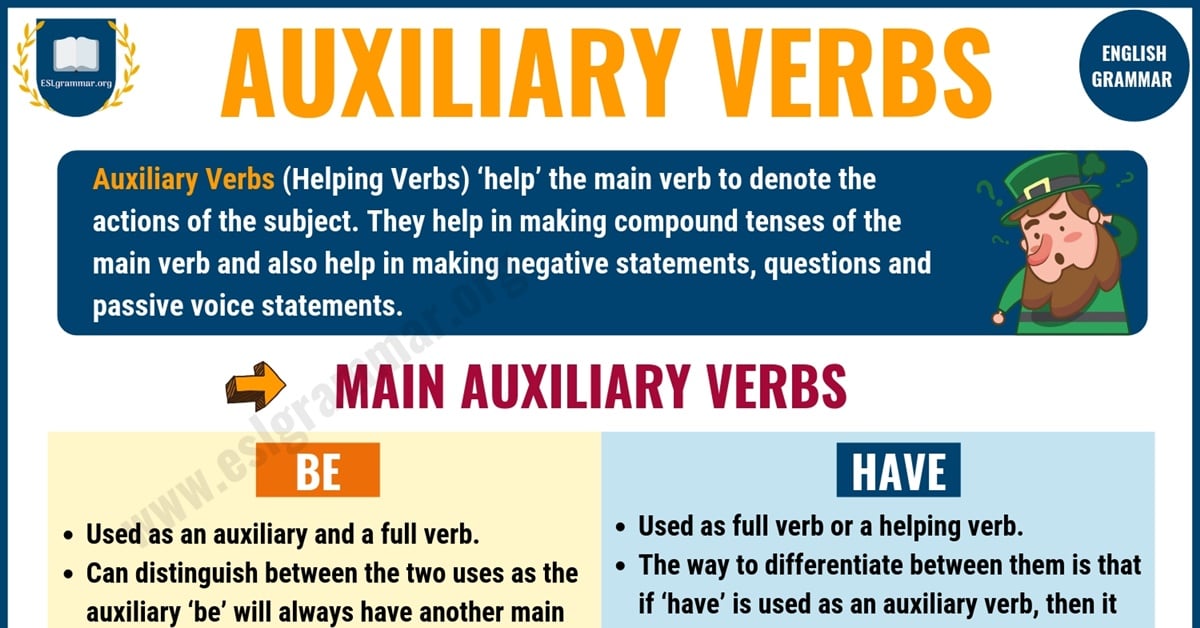 Helping Verbs or Auxiliary Verbs! What is an auxiliary verb? What is a helping verb? Learn helping verbs list with grammar rules and examples to improve your English.

What are Auxiliary Verbs?

The verb ‘be’ can be used as an auxiliary and a full verb, we can distinguish between the two uses as the auxiliary ‘be’ will always have another main verb coming after it in a sentence. ‘Be’ is an irregular verb with many different forms according to the different tenses. Please refer to the Irregular Verbs list to avoid confusion.

Progressive Tense Use of Be:

In progressive tense sentences made with ‘be’, we always use the ‘-ing’ suffixed version of the main verb.

Passive Voice Use of Be:

Using passive voice means when we want to put the emphasis on the object, to which the action is being done instead of on the subject or not include the subject at all.

Here the dishes are the object that received the action of washing but no subject is mentioned to show ‘who’ was washing the dishes.

The verb ‘have’ can also be used as full verb or a helping verb. The way to differentiate between them is that if ‘have’ is used as an auxiliary verb, then it has to be followed by a main verb as well. The verb ‘have’ is used to make compound tenses in active and passive voices, and also used in the making of negative sentences and questions. It is an irregular verb that changes form according to tense.

Using ‘Have’ in Compound Tenses:

While making negative sentences and questions with ‘have’ as an auxiliary verb, we need to be careful to put ‘have’ before the other verb otherwise ‘have’ becomes the main verb of the sentence.

In this sentence ‘have’ is the main verb while ‘does not’ becomes the auxiliary verb.

In this sentence ‘have’ is the helping verb for the main verb which is ‘got’.

In this sentence the main verb is ‘have’ as it comes after the helping verb ‘does’.

The verb ‘will’ is the only auxiliary verb that can never be a main verb. It is always used as an auxiliary to make future tenses and negative sentences. Also, it remains the same throughout every tense and person.

Future Tense Use of ‘Will’:

In negative sentences, the verb ‘will’ does not change its form when used with ‘not’. But it does form the contraction ‘won’t’ that is equally correct to use depending upon the language and flow of the sentence.

As ‘will’ can only be an auxiliary verb, both the sentences are grammatically correct.

When ‘do’ is used to make a sentence, we can only ask the question in the simple tense. For other tenses, we have to use other verbs whether main or auxiliary.

Places Where ‘Do’ is Not Used:

Modal auxiliary verbs never change form. You cannot add an “ed”, “ing”, or “s” ending to these words. They have only one form.

Can, could, may, might, must, ought to, shall, should, will, would…

You can use modal auxiliary verbs in these patterns:

After endless web searches, I finally found the information and answers I was looking for! Thank you!