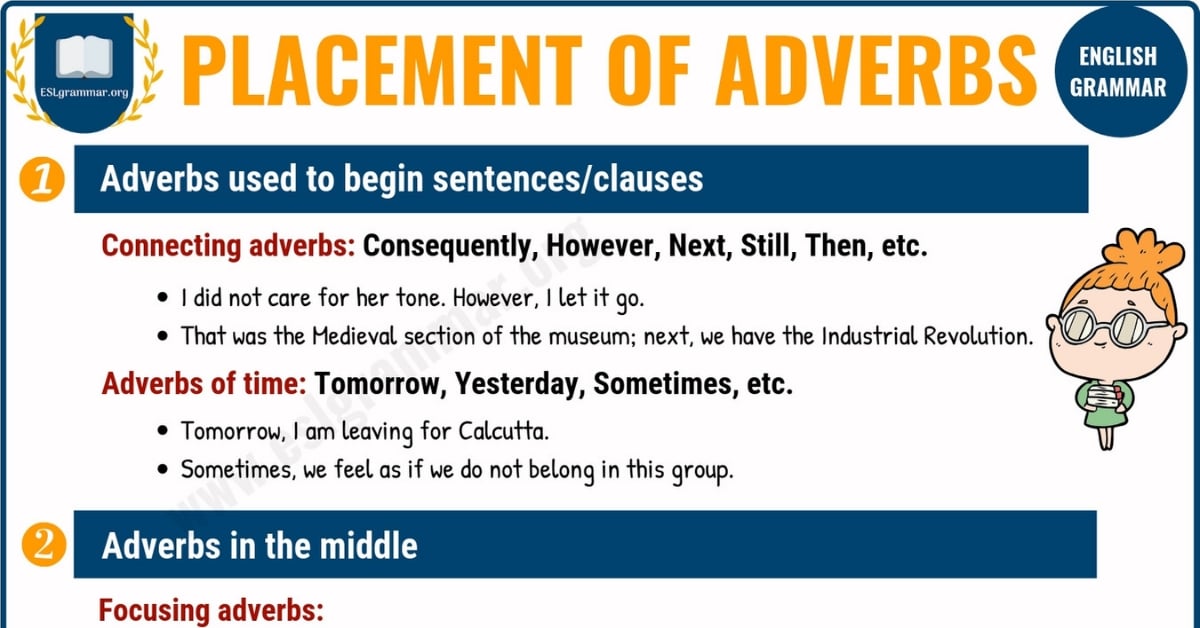 Adverb Placement! (Position of Adverbs in Sentences) Should we place adverb before or after verb? What this lesson goes to show is that an adverb can be positioned at multiple points in a sentence, and the guide below will help you decide where your chosen adverb should go.

Adverbs can be used in diverse ways, which means that they are very flexible in sentences; they can be moved around quite a bit without causing any grammatical irregularities.

To place an adverb at the beginning of a sentence or clause is also known as ‘initial position adverb placement’, and the adverbs that are commonly used in these positions are known as ‘connecting adverbs’, such as:

These adverbs are known as connecting adverbs, quite simply, because they are used at the beginnings of phrases and sentences to connect them to what has been said before. For example:

Time adverbs, like ‘tomorrow’, ‘yesterday’ and ‘sometimes’, are among the most flexible of all adverbs, and can often take the initial position. For example:

Adverbs in the middle | Adverb Placement

‘Focusing adverbs’ are those adverbs that emphasise a part of the clause or sentence to which they belong, and are generally used mid-sentence. Focusing adverbs include adverbs of frequency (often, rarely, never, always, etc), adverbs of certainty (perhaps, probably, certainly, maybe, etc) and adverbs of comment (adverbs that are used to express opinion, such as smartly, responsibly, intelligently, etc).

Note: Adverbs of frequency are used before the main verb, not the auxiliary verb.

This is the most common position of adverbs in sentences.

Adverbs of manner are used to describe how something is done, and are generally placed at the ends of sentences or clauses. For example:

Adverbs of place are used to describe the place where an event occurs, and are also positioned at the ends of sentences or clauses. For example:

Adverbs of time, as discussed earlier, can also find their ways to the ends of sentences or clauses. For example:

Learn position of adverbs in English with useful infographic.