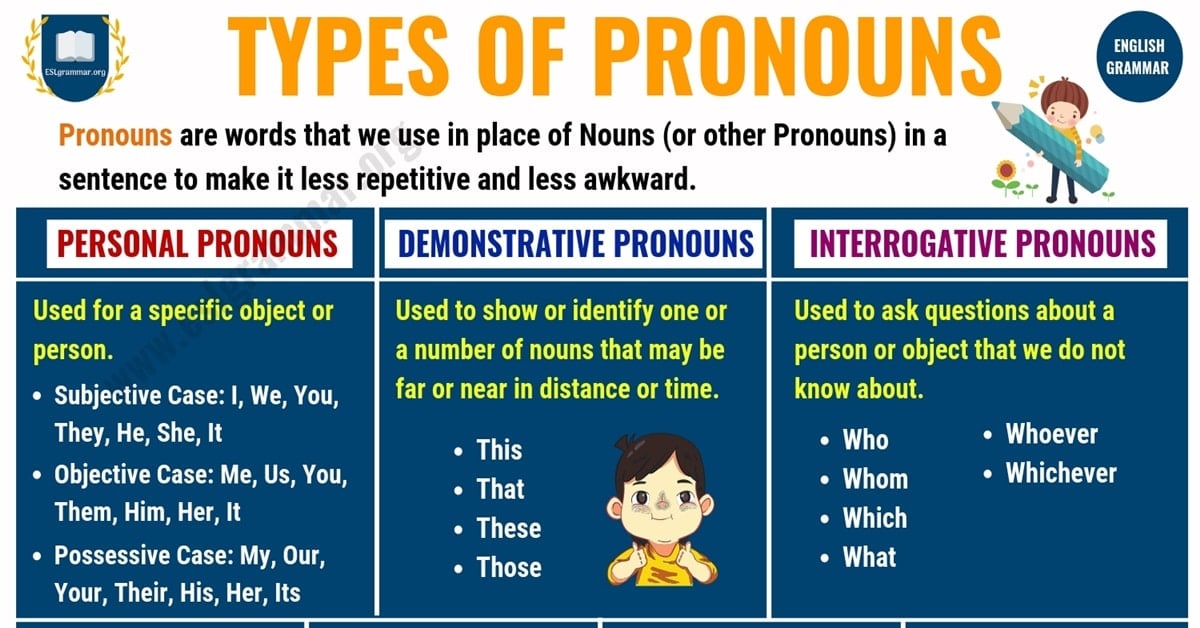 What is a pronoun? Pronoun definition. Learn different types of pronouns in English with pronoun examples, useful grammar rules and ESL infographics.

What is a Pronoun?

Pronoun Definition: Pronouns are words that we use in place of Nouns (or other Pronouns) in a sentence to make it less repetitive and less awkward.

What is a personal pronoun?

Personal pronouns are used for a specific object or person and they change their forms to indicate the different genders, numbers, case, and persons speaking.

We can see that the Personal Pronouns can be based on:

Singular Pronouns – Where the pronoun is only referring to one specific noun.

Plural Pronouns – Where the pronoun is used to refer to a number of nouns.

Subjective Case: She is at work.

Objective Case: He will meet us later.

Possessive Case: That is our clubhouse. 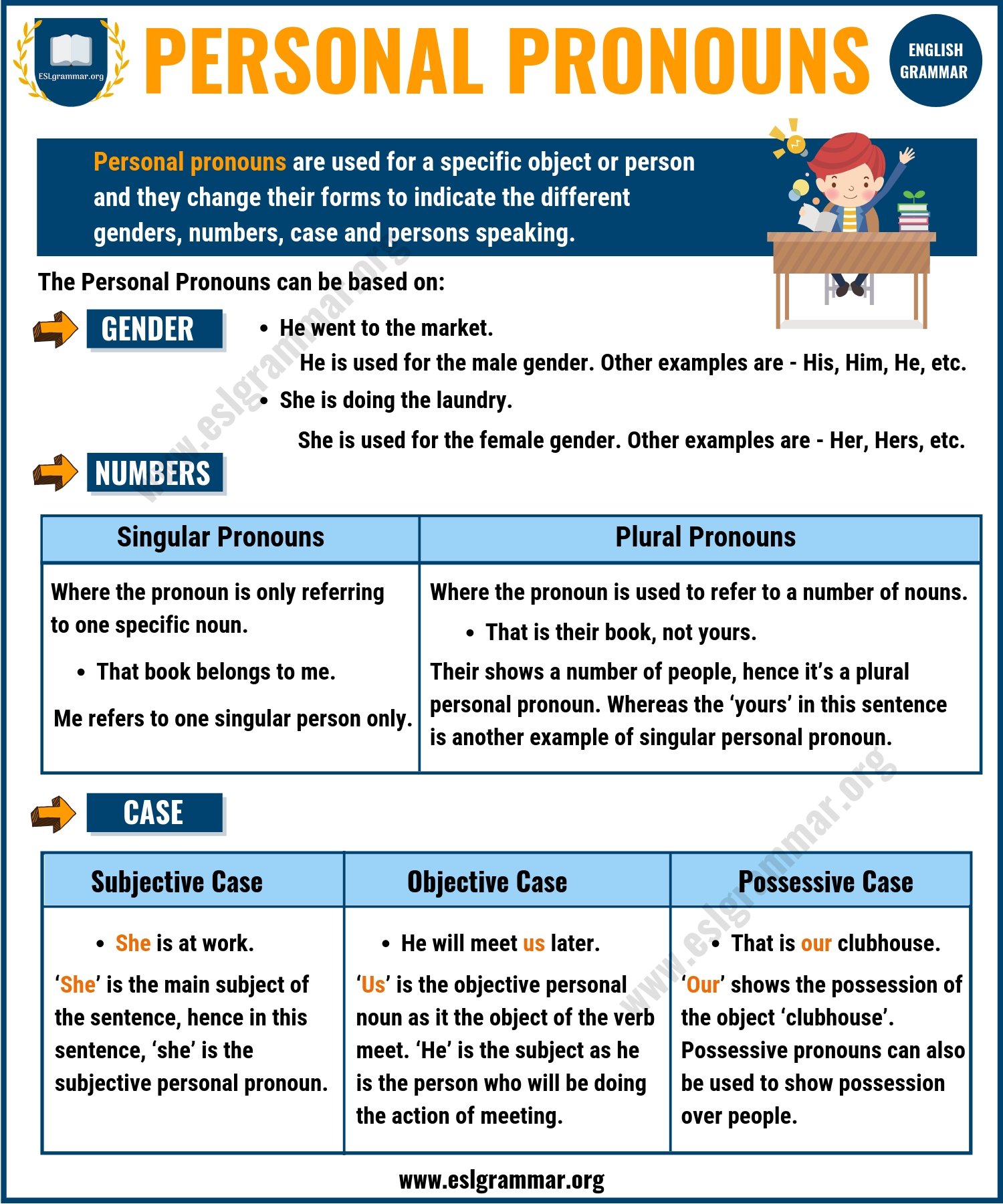 What is a demonstrative pronoun?

Demonstrative Pronouns are used to show or identify one or a number of nouns that may be far or near in distance or time. They are only four in number – This, That, These and Those. 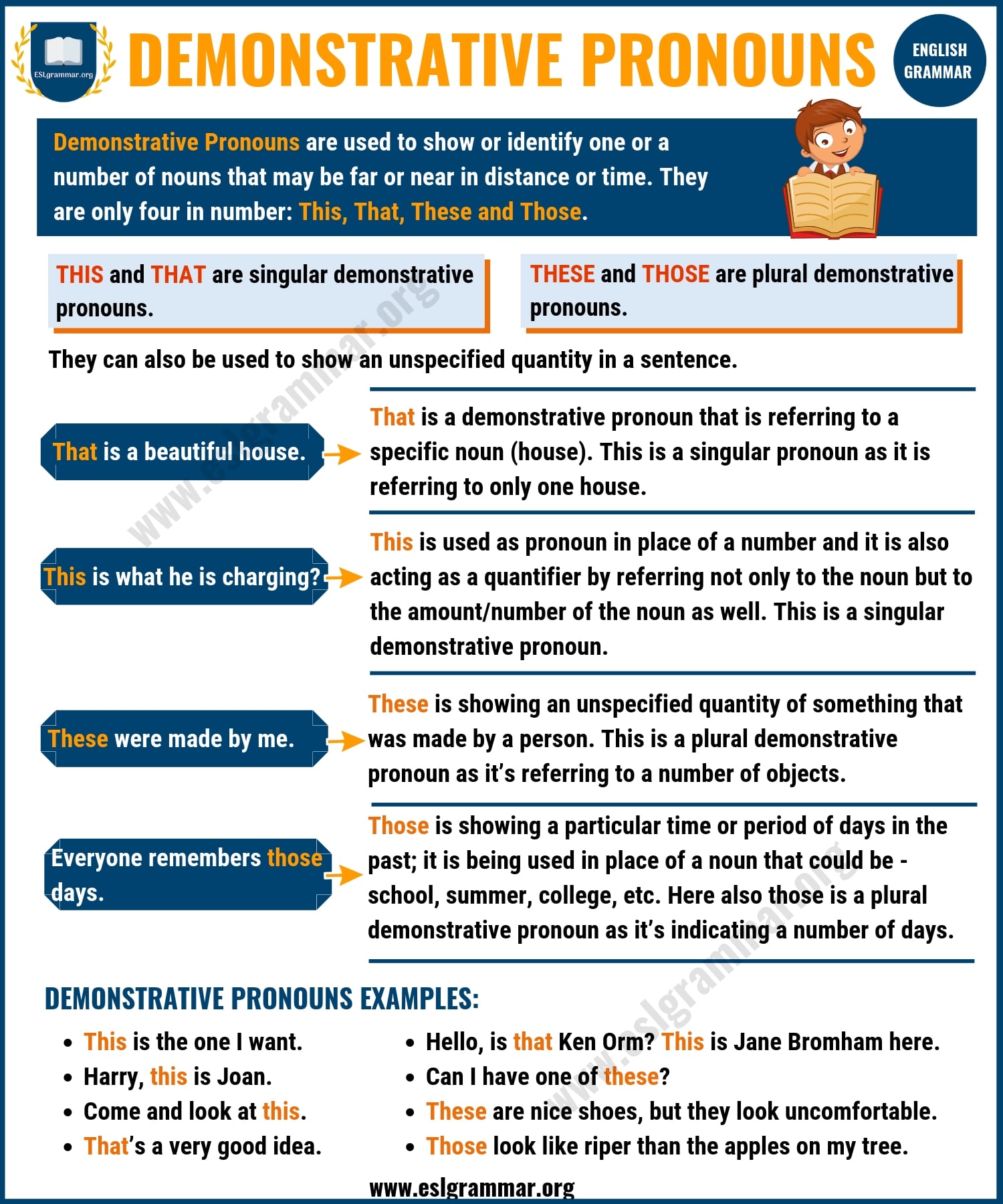 What is a interrogative pronoun?

Who, Whom, Which and What are Interrogative Pronouns as they are used to ask questions about a person or object that we do not know about. Compounds of these words are made by attaching ‘-ever’ to the words to strengthen the emphasis on the word. 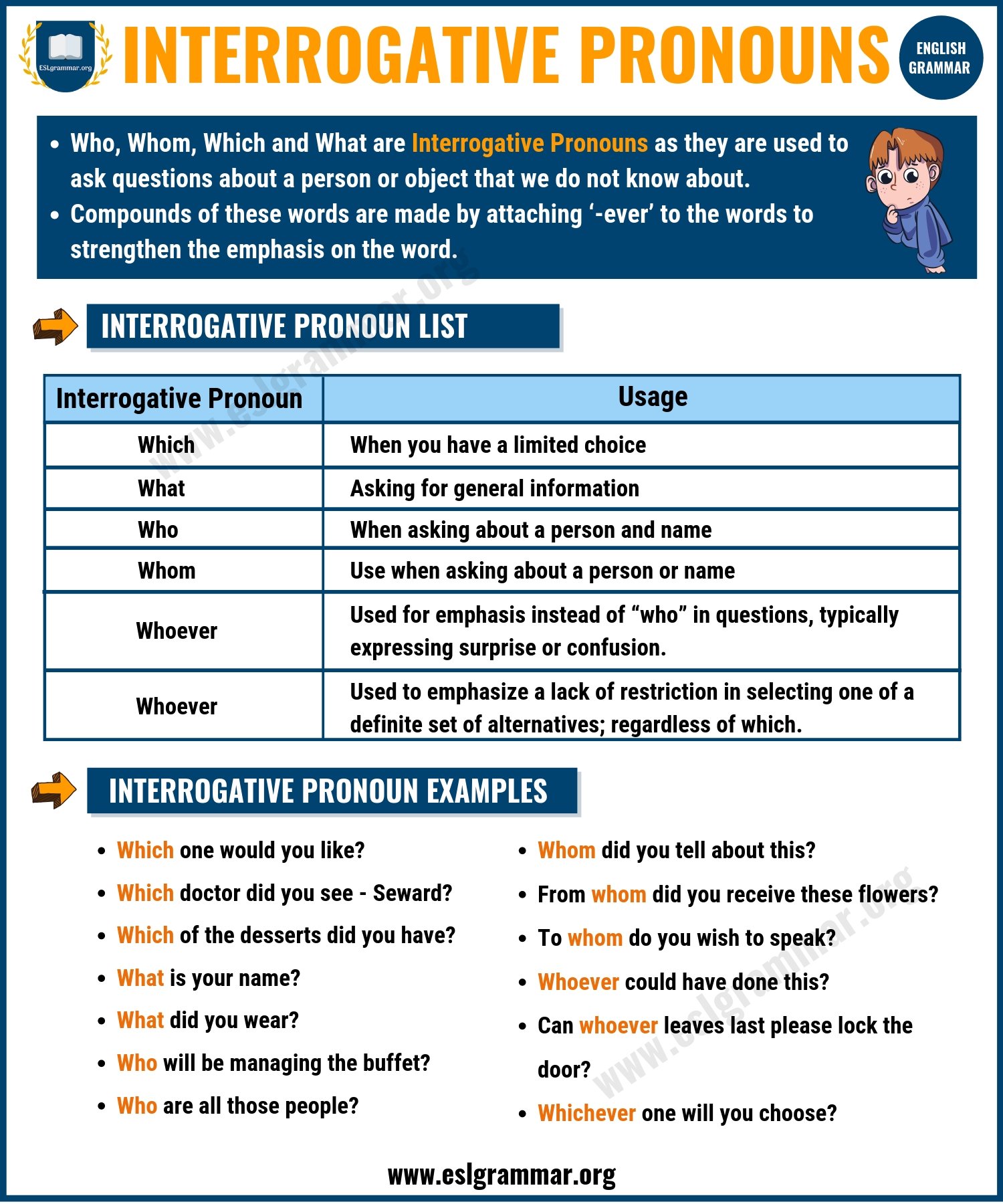 What is a relative pronoun?

Relative Pronouns are used to join or relate two different clauses together by referring to the noun in the previous clause using the pronouns – Who, Whom, Whose, Which and That. 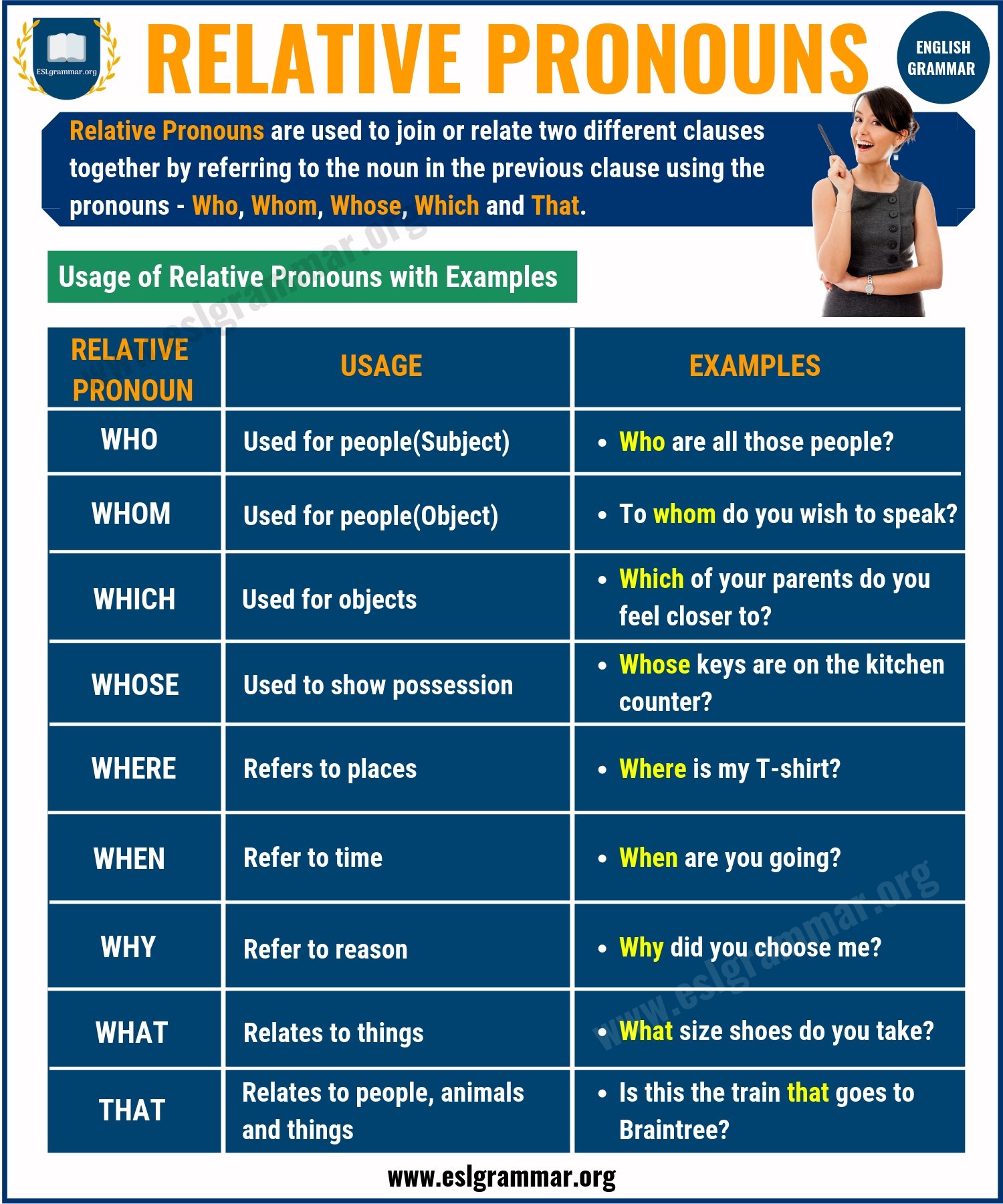 What is an indefinite pronoun?

Some common indefinite nouns are – anyone, someone, none, everything, many, few, etc. For examples: 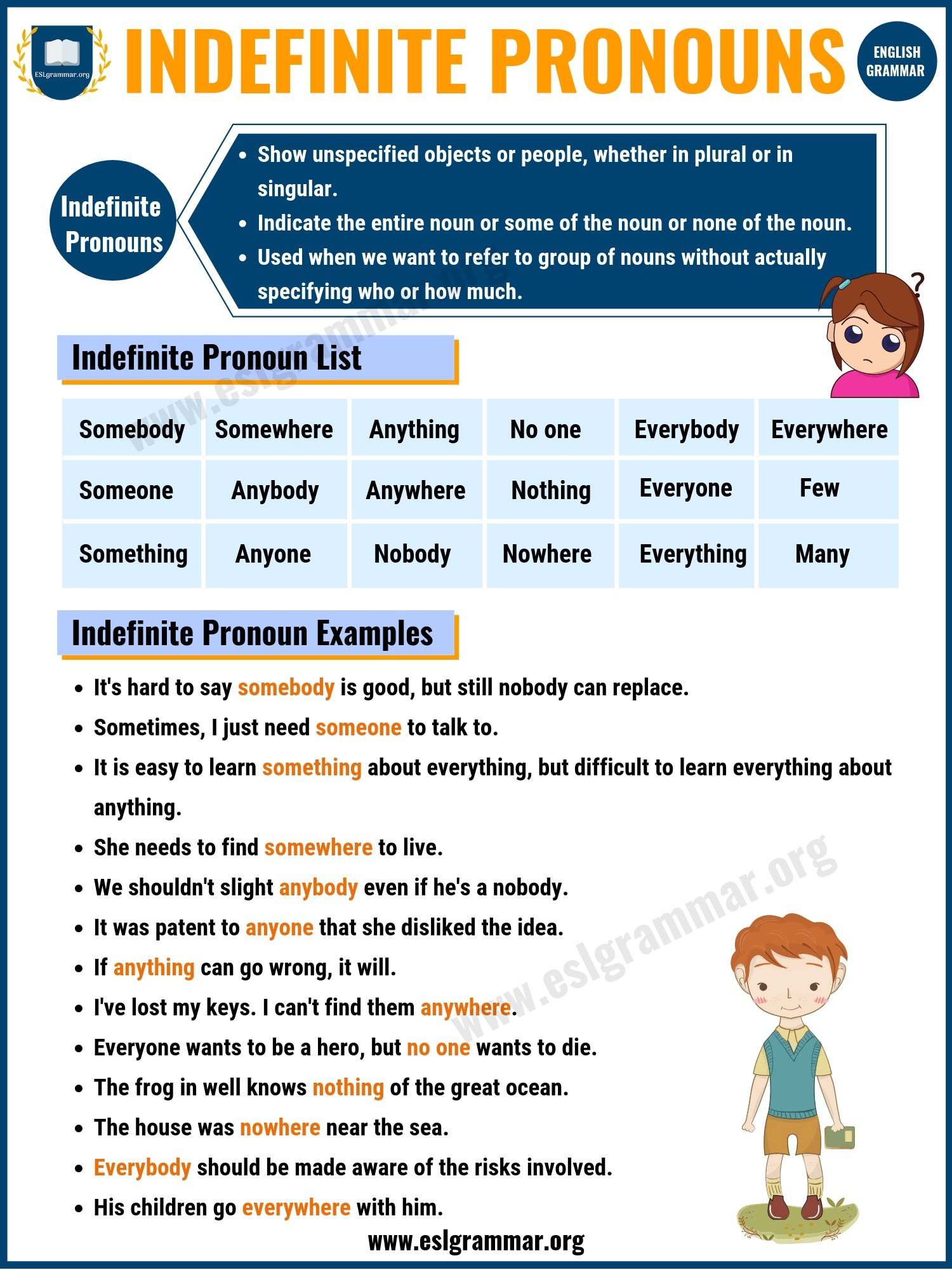 Reflexive Pronouns are those which are used to indicate a noun which has been used in an earlier part of the same sentence. These pronouns are – Myself, Themselves, Yourself, Ourselves, Herself, Himself and Itself.

Here, we can see that herself is being used to refer to ‘Rosa’ again at the end of the sentence.

Here, himself is used to refer to ‘him’.

Here themselves is used to show that ‘they’ cooked something.

Since itself is a gender neutral pronoun, it is used to show the nouns that have no definite gender. E.g. : material things or ideas, etc.; or whose gender is unknown. E.g. : animals.

These same words are also called Intensive Pronouns, which are used to lay emphasis on the pronoun that comes before them in the sentence.

Here, the pronoun themselves is used to emphasise ‘they’.

Here yourself is used to emphasise the pronoun ‘you’.

There are just two Reciprocal Pronouns: Each other and One another. They are used when two or more nouns are doing or being the same to one another. Both of these pronouns are plural in nature as they can only be used in situations where there is more than one noun.

Here, the reciprocation is between the children as they both sit together.

Here, neither of the two parties has seen each other in some time.

Here, we have an unspecified amount of trees bending towards the others in a strong wind. 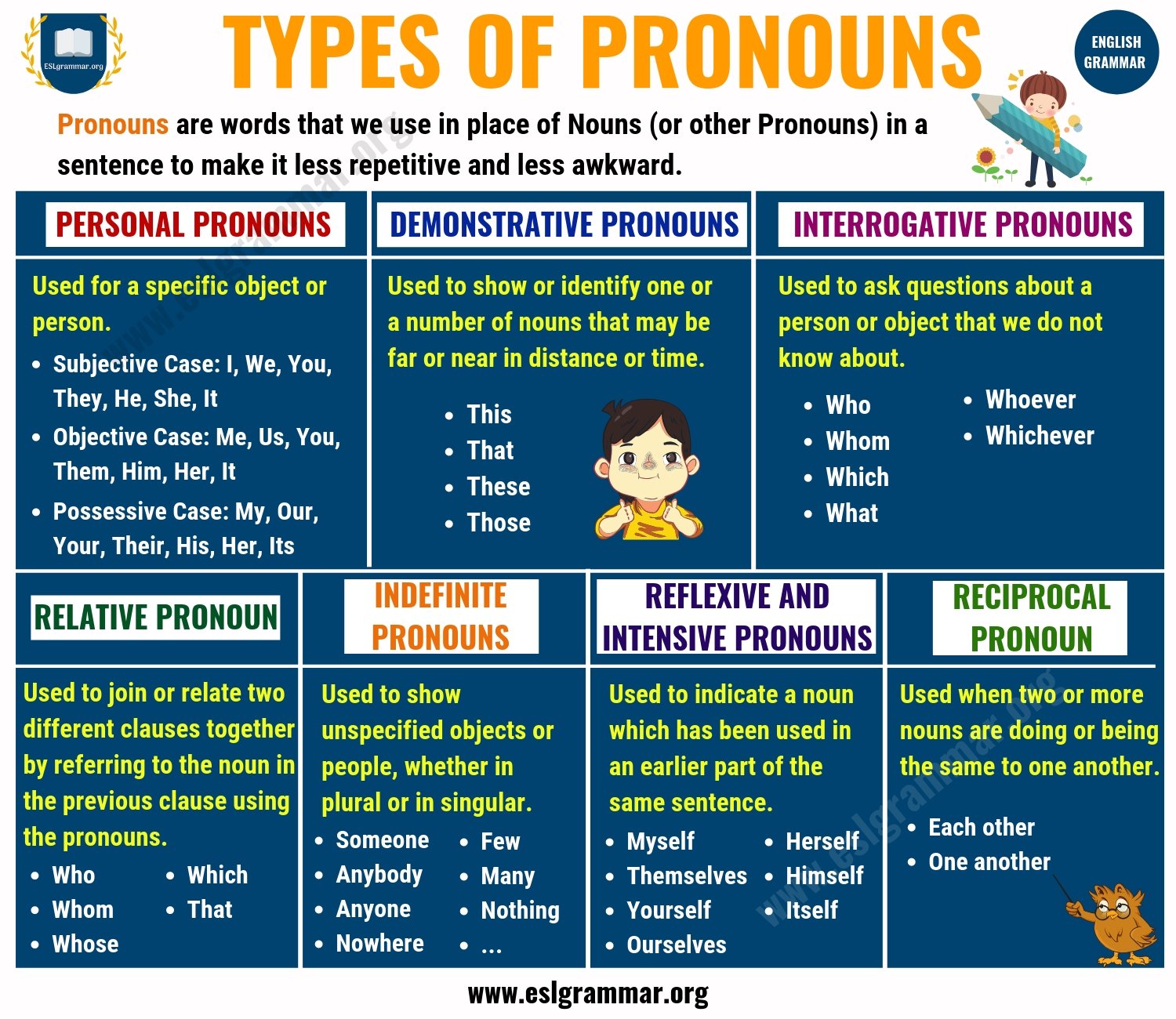 I have read through your works,they are excellent. I like English language.

this is me
Reply to  Assameyong Peter

Libbie Dano
Reply to  this is me

I love your grammar chat

this is me
Reply to  Nazar

i really like ESL. Its helps to learn english grammar

Oh sooo sorry guys that was my naught sis. I am very soorry please forgive me Assameyong Peter and nazar

Nazar ur name is very nice i like it 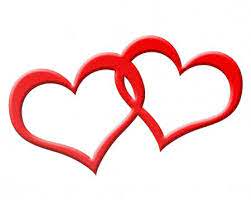 Patricia Meloy
Reply to  this is me

It was v. helpful. Thank you

“It was very helpful.”

your work is very nice

Ok i am ready.

Possessive case “pronouns” (“my, your, his, her, its, our, their”) are not pronouns; they are adjectives. Because pronouns are used as nouns in a sentence, (subject or object), and adjectives are not used as nouns, these words can’t be called “pronouns”. An adjective needs to be used to modify a noun. However, the possessive words “mine, yours, his, hers, ours, theirs” represent nouns and can be called pronouns. For example, My car cost a lot of money, but yours is more expensive than mine. (My+car = adjective +noun) (yours= pronoun for “your car“; mine = pronoun for “my car“) Parts… Read more »

The words my, your, his, her, its, our and their, when accompanied by one or more nouns, are adjectives that indicate possession. They are known as POSSESSIVE ADJECTIVES. The adjective AND the noun must be in the sentence. EXAMPLES: A) My dog is happy to see me. The word my modifies or describes the word dog. The word my functions as an adjective when the noun it describes is present in the same sentence. The word my ALSO conveys possession or ownership of that dog. Therefore my is called a POSSESSIVE ADJECTIVE. B) Their dog is asleep. The word their… Read more »

This a great help for me, and for my ESL students. Thanks for this so valuable gift of resourses.

Hello, I’m so very happy to have you as a great aid for my classes that are out my reach. I speak English but not an English teacher, so you are very helpful to me. Thanks