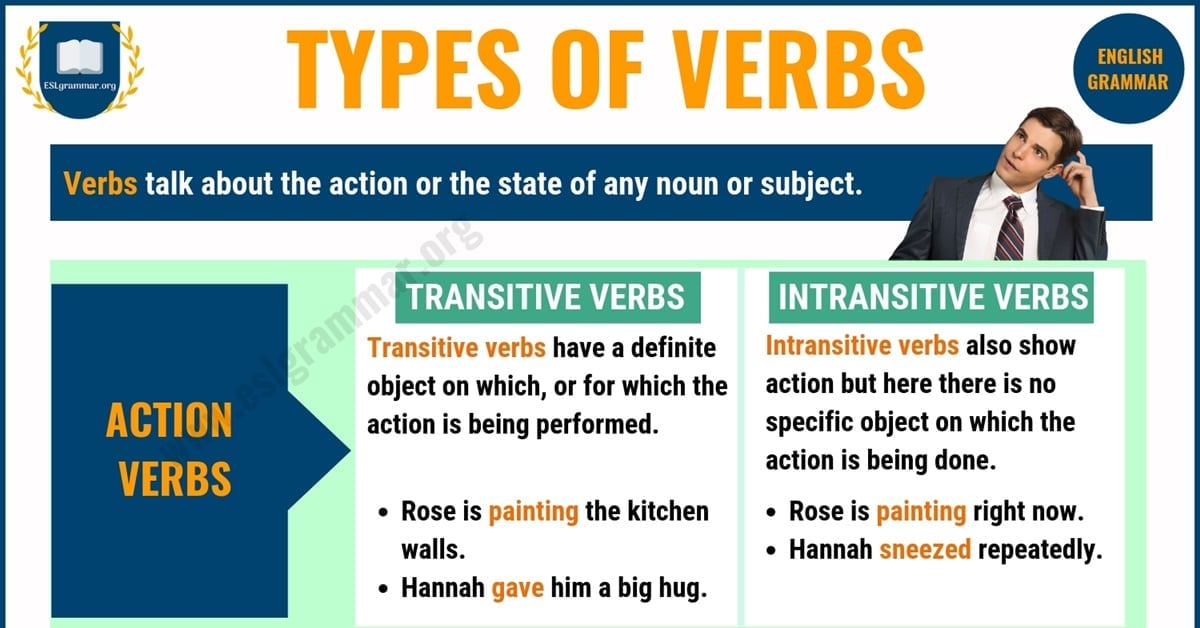 Verbs in English! What is a verb? Learn different types of verbs and how to use them in English sentences with useful examples and free ESL printable infographic.

What is a verb?

Verbs are the most important component of any sentence. These words talk about the action or the state of any noun or subject. This means that verbs show what the subject is doing or what is the state or situation of the subject.

There are different types and classifications of Verbs; some of the most important ones are listed below:

These verbs talk about what the subject is doing in the sentence. Action Verbs are one of the most easily identifiable types of verbs. To recognize them, you simply have to look for the word in the sentence that answers the question ‘What is the subject doing?’. For example:

The subject here is Rose, and what is Rose doing? Rose is painting. Hence painting is our action verb.

The subject here is dog, and what is the dog doing? The dog is sleeping. So sleeping is our action verb.

There are two types of Action Verbs which describe the Verb and the Subject doing the action and the Object on which the action is done, they are:

What is a transitive verb?

These Action Verbs have a definite object on which, or for which the action is being performed. That means that the action has a definite recipient or object. To identify them you can ask the question what is the/did the subject-verb?

Here the verb is painting and the subject is Rose.

If we form the question – what is Rose painting?

The answer is – The kitchen walls.

Thus, we see that there was a specific object on which the action of painting was being done.

Here we see that the action ‘gave’ is being performed by the subject Hannah. So the question is what did Hannah give? And the answer is – A big hug.

What is an intransitive verb?

These verbs also show action but here there is no specific object on which the action is being done. To recognize these verbs, we ask the question “what is the/did the subject-verb?” If there is no answer present, then the verb in the sentence is an Intransitive Verb. For example:

Here, if we ask the question what is Rose painting? There is no answer which means that in this sentence painting is an Intransitive Verb.

It is telling us about the action of the subject but there is no specific object for the action.

Here, the verb is “sneezed”. If we ask the question what did Hannah sneeze? There is no answer present for it making sneezed an intransitive verb.

This category of verbs deals with the verb words themselves; and whether they indicate an action or a state of the subject. This category is not concerned with the object in particular.

What is a dynamic verb?

Here the verb is “buys” which is an action done by the subject ‘she’, hence it is a dynamic verb.

Here again, we have the definite action swimming done by the subject ‘he’, making ‘swimming’ a dynamic verb in this sentence.

What is a stative verb?

Here the Stative Verb is ‘prefers’ which shows the thinking of the subject ‘She’ towards the object, which is ‘jam’. 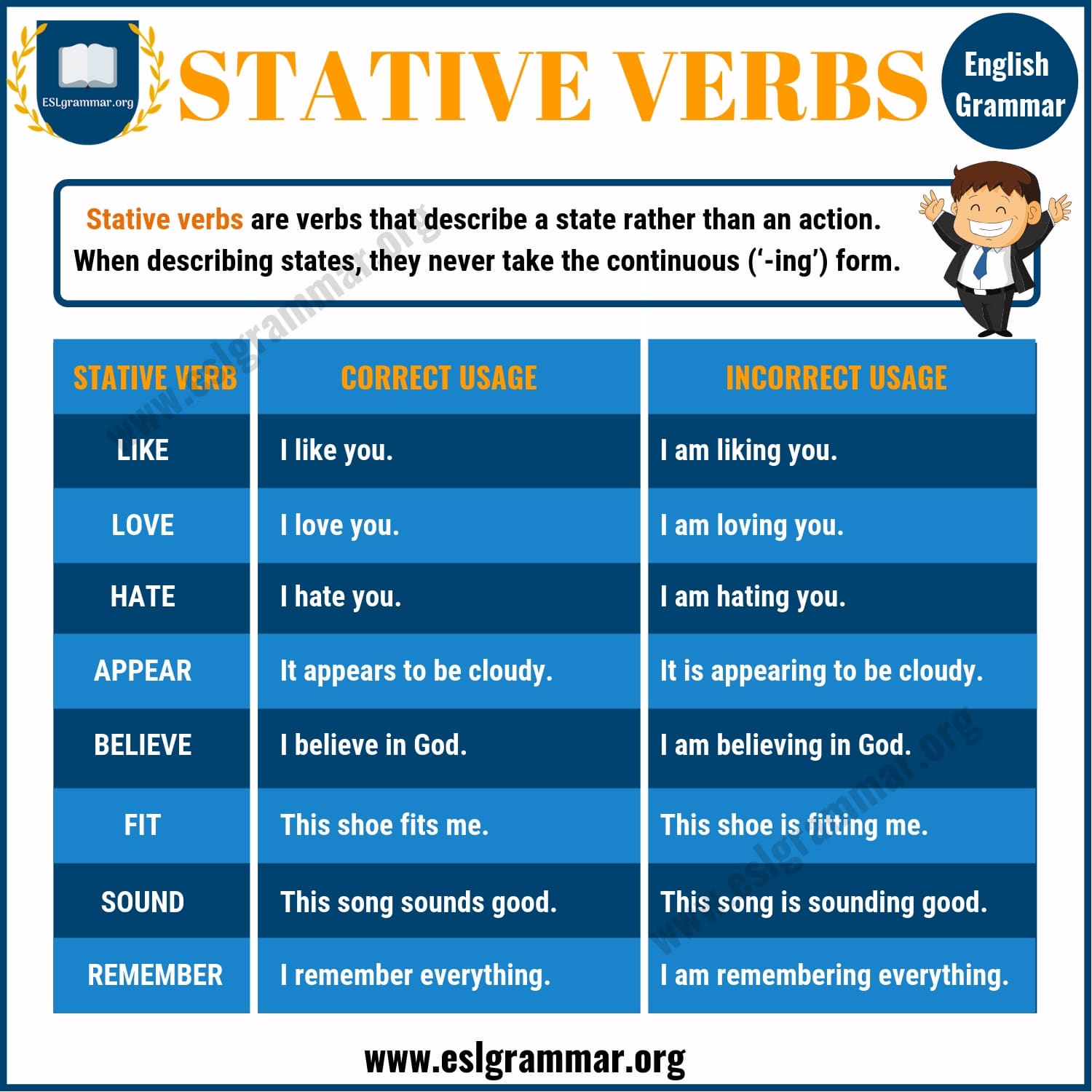 What are linking verbs?

These verbs are unlike other verbs as they do not tell anything about a subject themselves, instead Linking Verbs connect the subject to a noun or adjective that helps in describing or providing additional information about the subject. Those nouns or adjectives are called the subject complements. For example:

Here we see the subject is Lisa and the linking verb is ‘is’ which is connecting Lisa to the subject complement ‘fussy about food’ which is giving additional information about Lisa’s preferences.

Here the linking verb is ‘are’ which is combining the subject ‘They‘ to the subject complement of ‘stubborn’ which is an adjective.

The best to recognize linking words in a sentence is to see whether the verb can be replaced by ‘is, am or are’. If the sentence still sounds logical you know you have a linking verb.

Hence ‘felt’ was a linking verb and not an action verb. As ‘felt’ here is simply connecting the subject to the adjective.

Hence in this sentence ‘felt’ is action verb as it is the action of ‘feeling an emotion.’

To use verbs correctly in sentences you need to learn more about the construction and use of the various verbs. And how they change form according to tenses and use in a sentence. For correct application verbs in written text you will need to know about:

Regular and Irregular Verbs – These are the two different ways in which verbs change to form different tenses. Whether to simply add ‘-ed’ at the end of a verb or does it take a different form altogether. 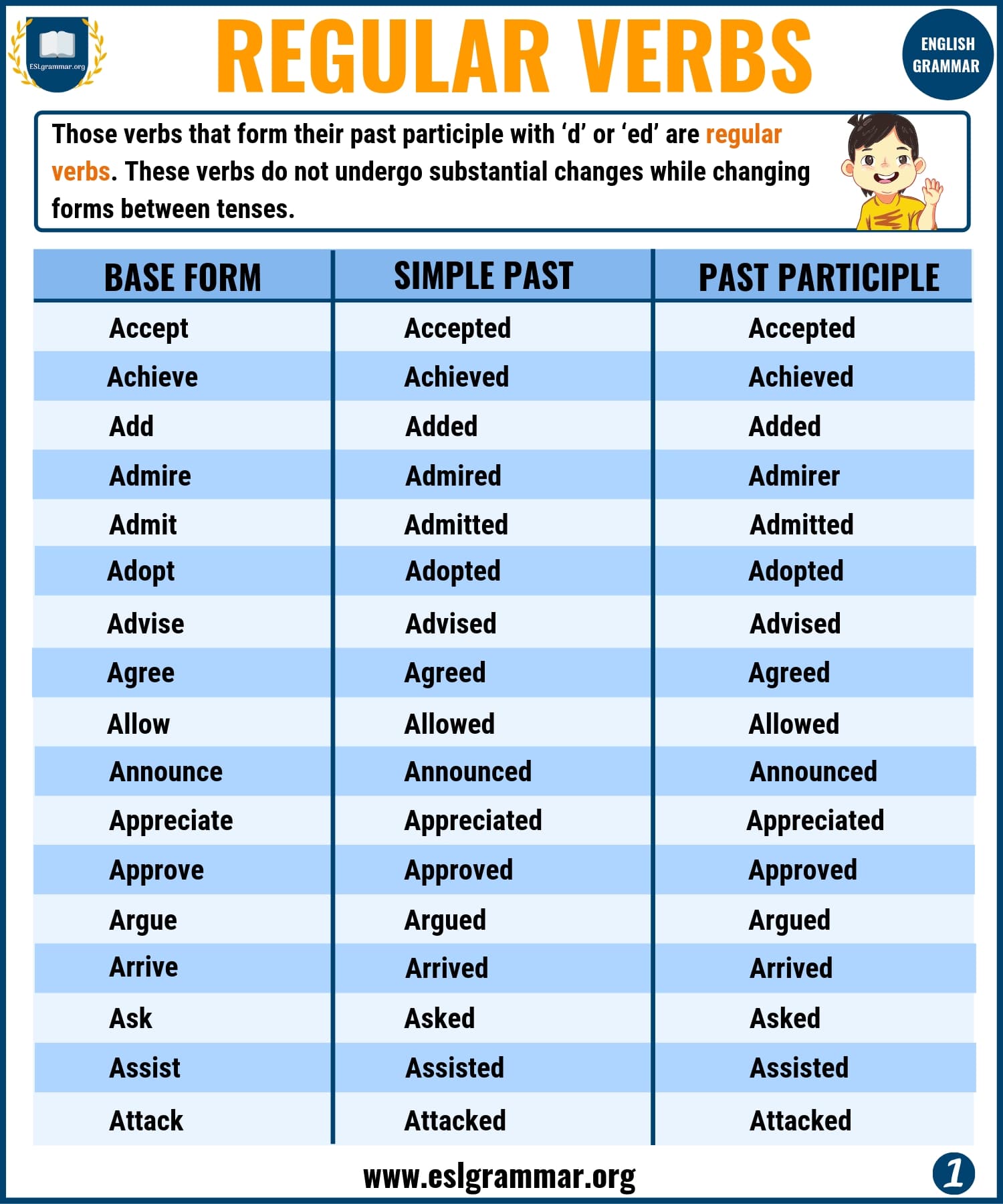 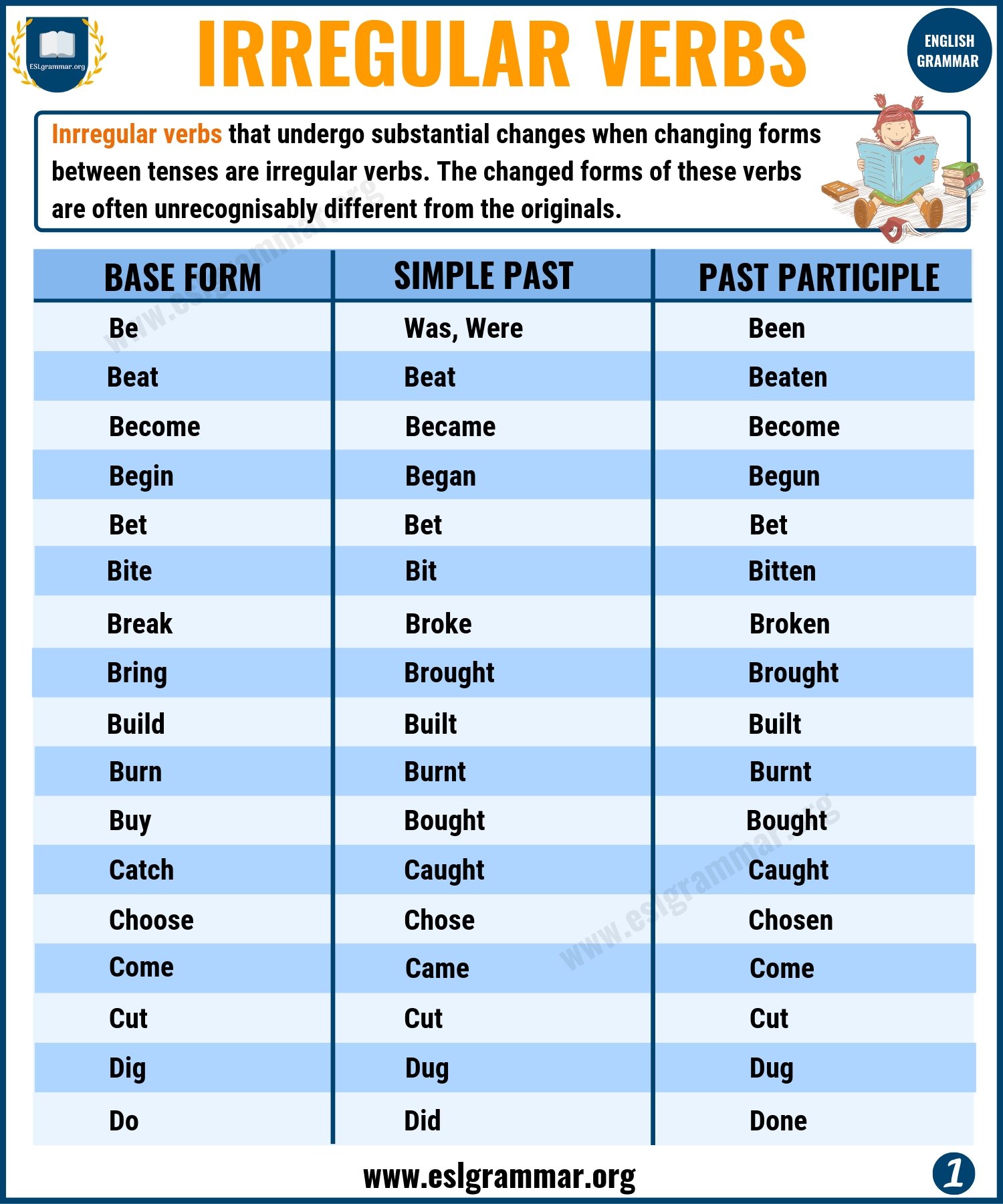 Finite and Non-Finite Verbs – These are verbs which can be either the main verb of a sentence or just one that is used as an adjective or noun as well. 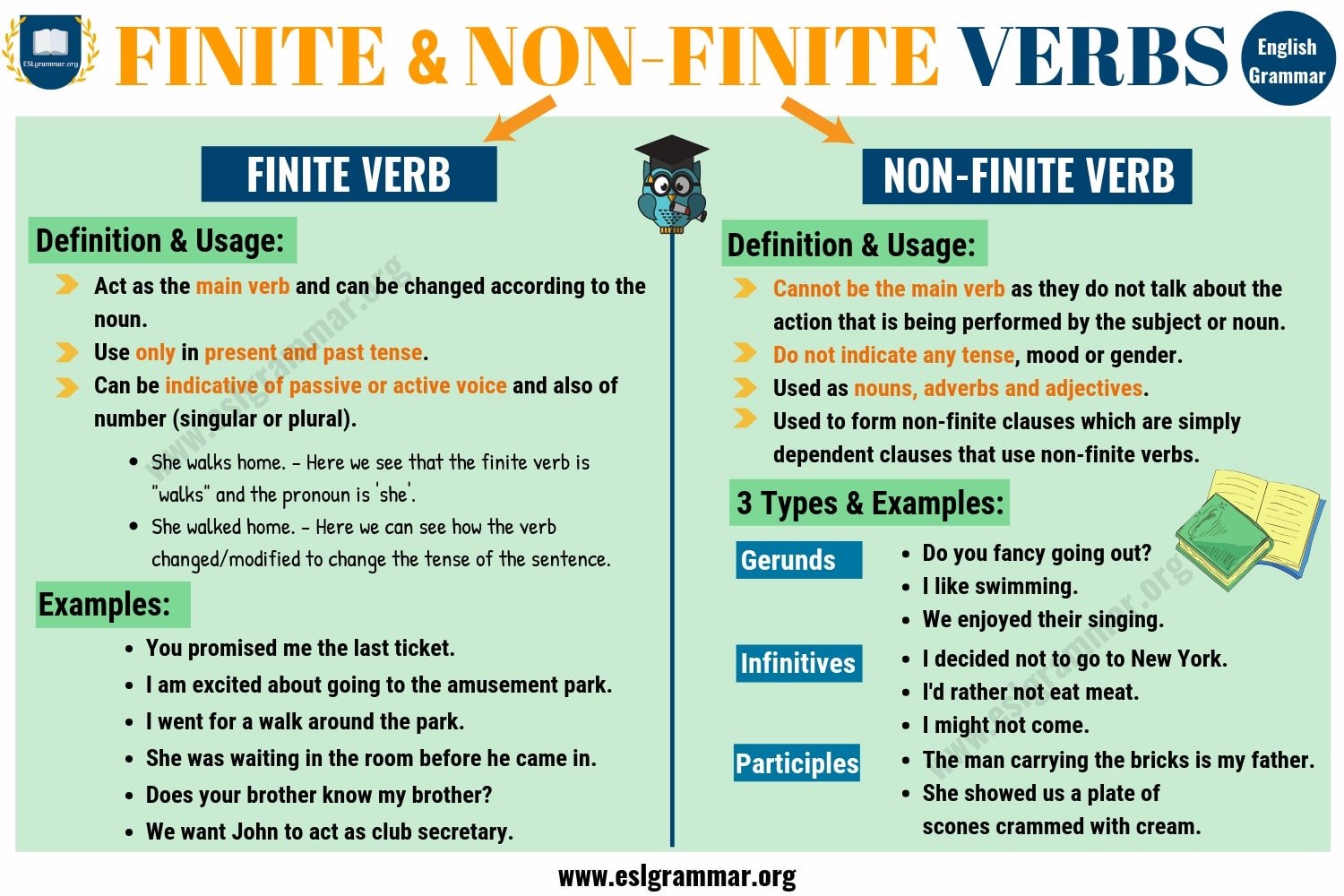 Modal Verbs – These verbs tell us whether something is probable or about the skills of a noun etc. There are 10 modal verbs in total and each has an important part in sentence formation. 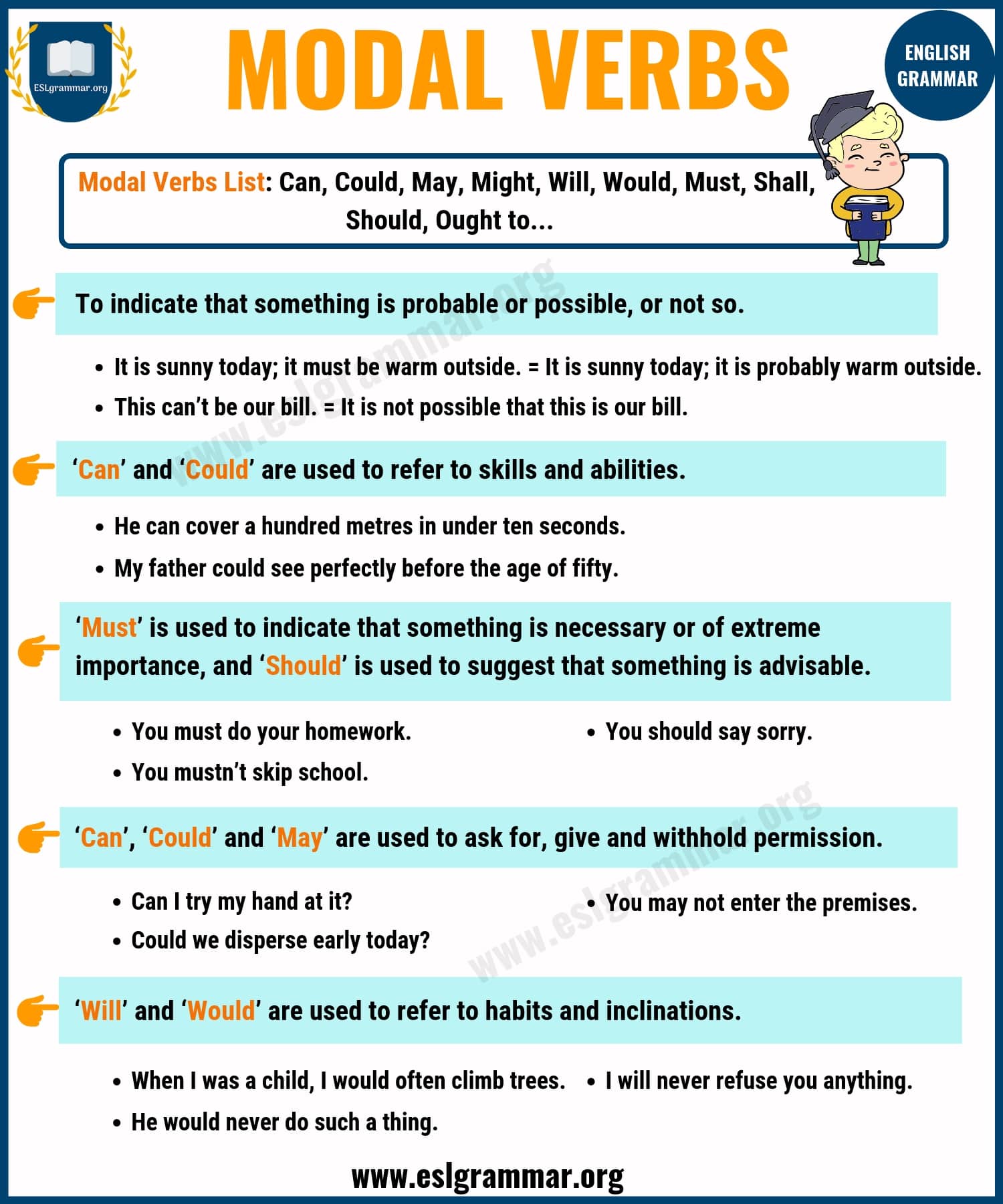 Types of Verbs in English | Image 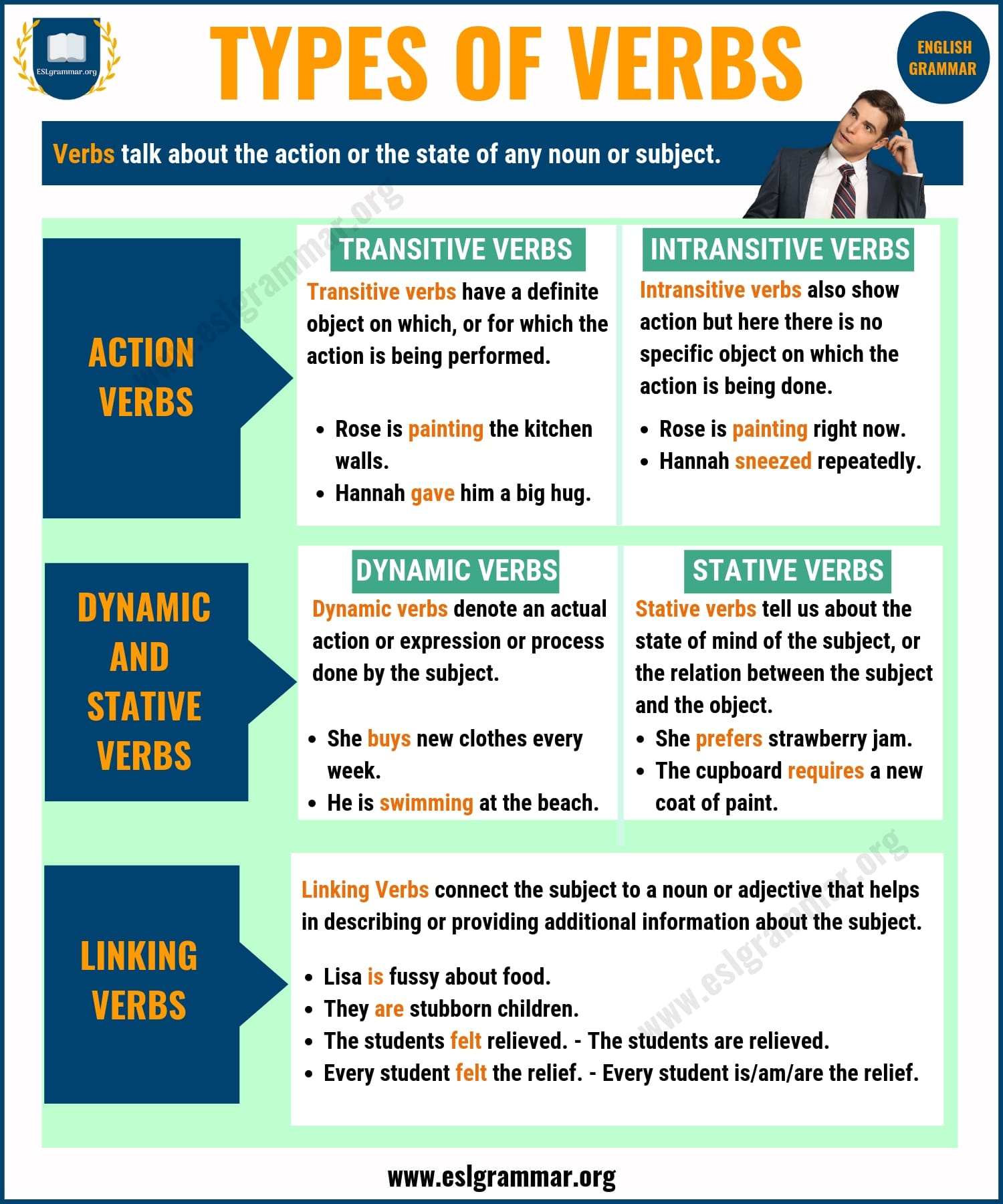 your dad
Reply to  hot 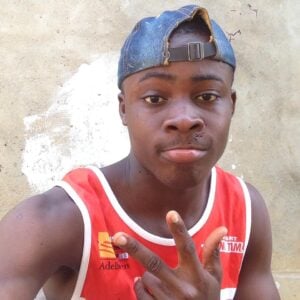