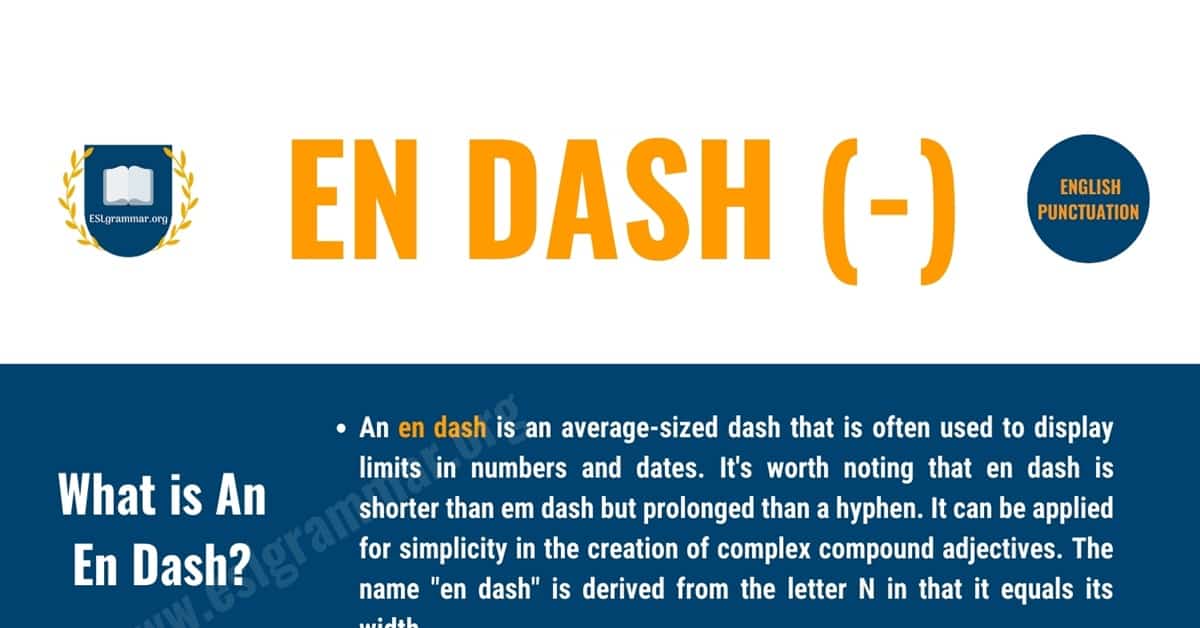 En Dash! What is an en dash? How & when to use it? The following article introduces the definition, usage of en dash with useful examples in English with ESL infographic.

What is An En Dash?

An en dash is an average-sized dash that is often used to display limits in numbers and dates. It’s worth noting that en dash is shorter than em dash but prolonged than a hyphen. It can be applied for simplicity in the creation of complex compound adjectives. The name “en dash” is derived from the letter N in that it equals its width.

How to Use En Dash?

An en dash can also be used to show a disparity or link between two words. It’s inserted directly between words/numbers it’s linking while leaving no spaces.

Keying in an en dash is somewhat different based on the operating system installed on your PC. To type an en dash in Microsoft Word or Google Docs, click “Insert,” go-to “Symbols,” click “Special Characters,” scroll down and select En dash and finally click the insert button. By doing so, you’ll have added an En dash to your document.

You can do the same by holding down the Ctrl key and press the minus (-) on your numerical pad.

When to Use En Dash

As mentioned earlier, en dashes are used for specific purposes. With that in mind, let’s look at the various uses of en dashes.

Showing Ranges in Numbers and Dates

An en dash is largely applied in scientific and mathematical terms because it denotes the word to when used between the numbers. It’s also applied when writing page numbers in terms of up to.

Used with Scores and Directions

An en dash can be used to define scores, directions, as well as votes. In this scenario, an en dash denotes the word “to.”

Used to Show Ranges in Amounts

Like in numbers, an en dash can be used to show ranges in the amount of something.

The en dash can be used to highlight rivalry or connection between two groups/people. In the phrase “Barcelona–Valencia game,” the en dash denotes the word versus.

Contrary, the “Jason–Peters book” denotes a book written by the duo. The “United Kingdom–Germany trade pact” refers to the pact made between the two nations.

From the above, it’s apparent that the en dash is used for specific purposes and not in all contexts. It’s worth noting that the uses of en dash are not limited to the ones discussed above.